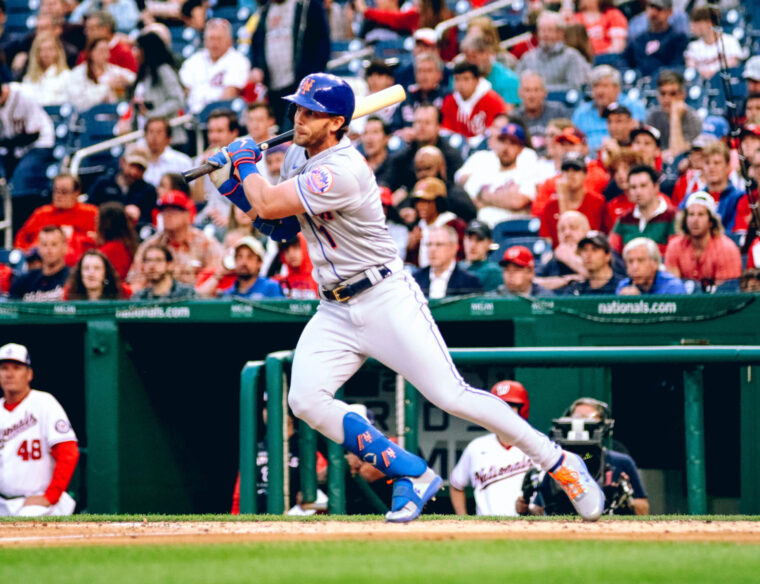 As of June 21, the New York Mets currently sit atop Major League Baseball in both batting average (.261) and on base percentage (.334), which has helped them to maintain a 5.5 game lead in the NL East despite a currently banged -up pitching staff.

Throughout the first few months of the 2022 campaign, the Mets hitters have taken a consistent approach at the plate. Part of this new successful approach can be attributed to the new acquisitions such as Mark Canha and Starling Martealong with the mindset that Buck Showalter, Eric Chavez, and the rest of the Mets coaches have looked to instill within these of the Mets hitters

This article will take a dive into the numbers of the 2022 New York Mets hitters thus far into the season. All players who are listed must have at least 50 plate appearances in 2022. Statistics used for the respective hitters were gathered from Baseball Savant.

Analysis: Catcher is the glaring weak point when it comes to hitting in the Mets lineup. With McCann on the IL since May 10, Nido nor Patrick Mazeika have really provided any uptick when it comes to offensive production. Meanwhile, McCann may have not been swinging a great bat himself, but his expected stats do indicate some positive regression ones he is expected to return from the IL sometime this week.

Alonso with his first multi-homer game of the year pic.twitter.com/xfDCzHx3jD

Analysis: Pete Alonso is not only a top bat in the Mets lineup but in the entire National League. The NL RBI leader continues to build on an impressive start to the season, and the expected stats indicate that he will only continue to perform at this level. Meanwhile, Dominic Smith got called back up to the Mets yesterday after Seth Lugo was placed on the paternity list. Hopefully, Smith found his swing in the short stint Syracuse that brought him more success earlier on in his MLB career.

Analysis: After a disappointing 2021 season, McNeil has rebounded with a .327 average, which includes a .371 AVG with runners on, and a .404 AVG with runners in scoring position. Although the expected stats indicate that regression may be coming, he has shown the ability to beat defensive alignments with soft ground ball hits, which likely contributes to these numbers. Meanwhile, Luis Guillorme has been the most valuable utility asset for the Mets this season on both sides of the diamond, providing a steady bat and consistent glove around all positions in the infield.

Analysis: Francisco Lindor has seemed to settle in. He has been somewhat streaky with the bat this season, getting off to a blazing start in April, before slowing down in the months of May and June. A fractured finger likely contributes to the slow start in June so far for Lindor, but the numbers are still very solid overall, especially considering the value he brings on the other side of the diamond.

The last #put hitter prior to Lindor to hit a homer 440+ feet to dead center at Citi Field was Pete Alonso on August 24, 2019.@Metsmerized #LGM pic.twitter.com/1AEWG3QK82

Analysis: Eduardo Escobar has shown flashes this season, and arguably has the best single game with the bat in 2022 so far with his cycle in San Diego, but has not hit as expected thus far into the season. Although he was never known for getting on base, Escobar’s .677 OPS sits well below his career OPS of .741, and the expected stats do not indicate much improvement. With respect to JD Davis, he has been the “Savant Darling” for the Mets this season. His expected slugging percentage sits second on the team behind Pete Alonso, but a glaringly high strikeout and ground ball rate have prevented him from taking over the DH role on a full-time basis.

Nimmo with his first homer since April 25 to get a run back for the Mets. pic.twitter.com/cCP9fKBuFD

Analysis: Canha, Nimmo, and Marte have been the steady outfield trio within the Mets lineup this season. All three of the players have an OPS that sits between .774 and .779. Talk about consistency. Nimmo and Marte have been a solid one-two punch at the top of the order, as Marte has heated up after a difficult start with the bat. Meanwhile, Canha has shown the ability to go to all fields with his bat, while maintaining a career high .383 OBP.

The Mets bats will look to continue to put the ball in play and hustle out every infield single throughout the season. It is clear that a new manager and hitting coach have changed the Mets’ hitters approaches for the better. With a pitching staff that is continuing to recover slowly, it is important that the lineup that leads the MLB in both average and on base percentage continues to succeed throughout the summer months of the season.