At this point in the Blues’ offseason, everyone has an idea of ​​what the roster could look like in 2022-23. You know the team’s salary-cap situation and who needs to be re-signed. You probably have thoughts on what might or might not happen, which you can share in our annual fan survey.

What do I think will happen? Who stays and who goes during the offseason ahead?

This year, I took the Blues’ 23-man roster and divided it into eight categories that I think best describe players’ status. You may not agree with all of them — that’s what the comments section is for — but this is how I see their situation as we speak: 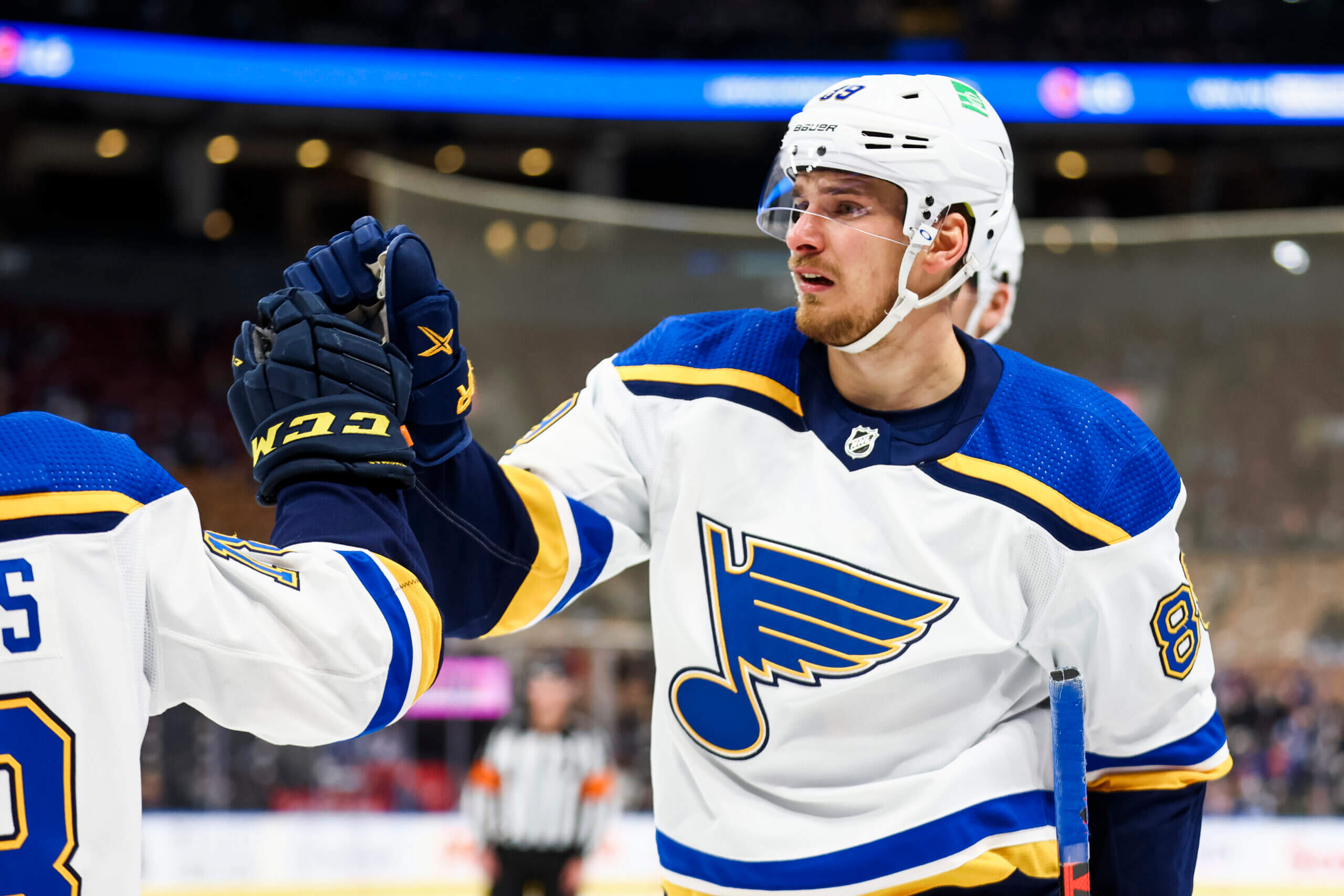 Blues general manager Doug Armstrong would make the Buchnevich trade with the New York Rangers 10 out of 10 times. Buchnevich had 30 goals and 76 points at a bargain price of $5.8 million, and there are three more years left on the deal.

The captain is the heart and soul of the roster. The question isn’t whether he’ll be around in 2022-23; it’s when do you start talking contract extension with the 32-year-old, who could play the rest of his career in St. Louis.

He’s a leader and the Blues’ best defenseman. It’s hard to believe that there was a time when his seven-year, $45.5 million ($6.5 million average annual value) seemed like an albatross because now it looks like a steal with five years remaining.

If the 22-year-old center had underperformed or suffered a few more injuries last season, the Blues might’ve been a little worried about his future. But after posting 20 goals and a team-high 57 assists, his future is as bright as ever.

He may not be untouchable, per se, but would I trade him? No. He’s 24, and in the past two seasons, he has combined 110 points in 129 games. Yes, he has some holes in his game, but with talent like his, you have to let him develop. 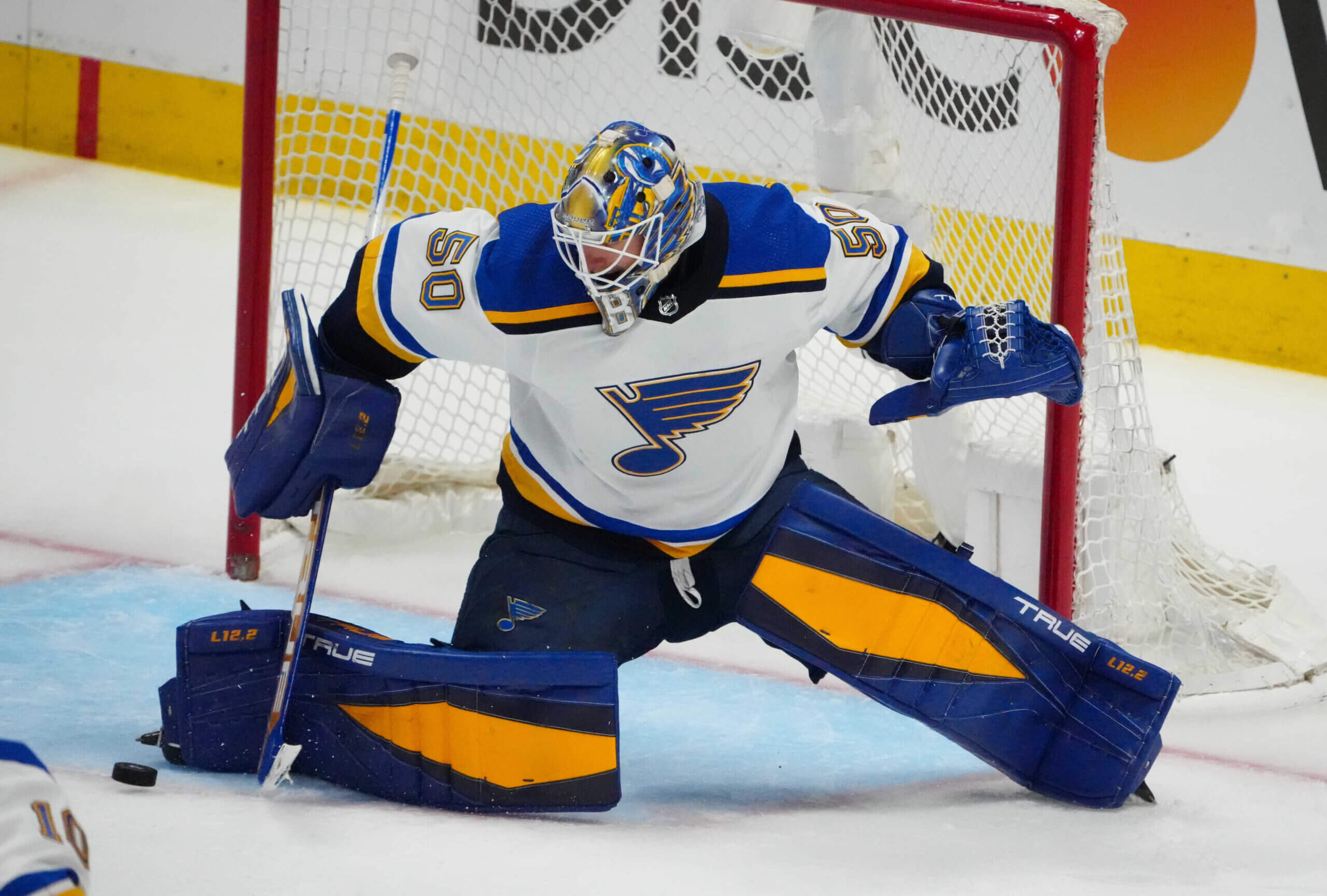 Did his playoff performance restore the Blues’ faith in their No. 1 goaltender? Perhaps, but even if the club isn’t completely comfortable that he’s back to his old form, he’s likely its best option heading into the 2022-23 season.

There are some fans who would deal him, but I don’t think the team has any desire to do so, and in reality, it would be hard. You’d need a No. 1 defensemen in return, and keep in mind, that would cost you a lot more than his $6.5 million AAV.

He’s at the perfect stage of his career with regard to where the Blues are in their championship window. There might come a day when prospect Scott Perunovich proves that he’s capable of taking over this spot, but it’s not now.

He’s the prototypical Armstrong player—accountable, skilled and tough—which is the reason the GM signed him to an eight-year extension. He brings an element the Blues don’t have, and I don’t see the club parting ways with him any time soon.

He’s 22, has a ton of potential and makes $750,000, so it doesn’t seem like he’ll be going anywhere. If there’s a big trade on the table and the other team insists on including him, you may give it some thought. But it would be really hard. 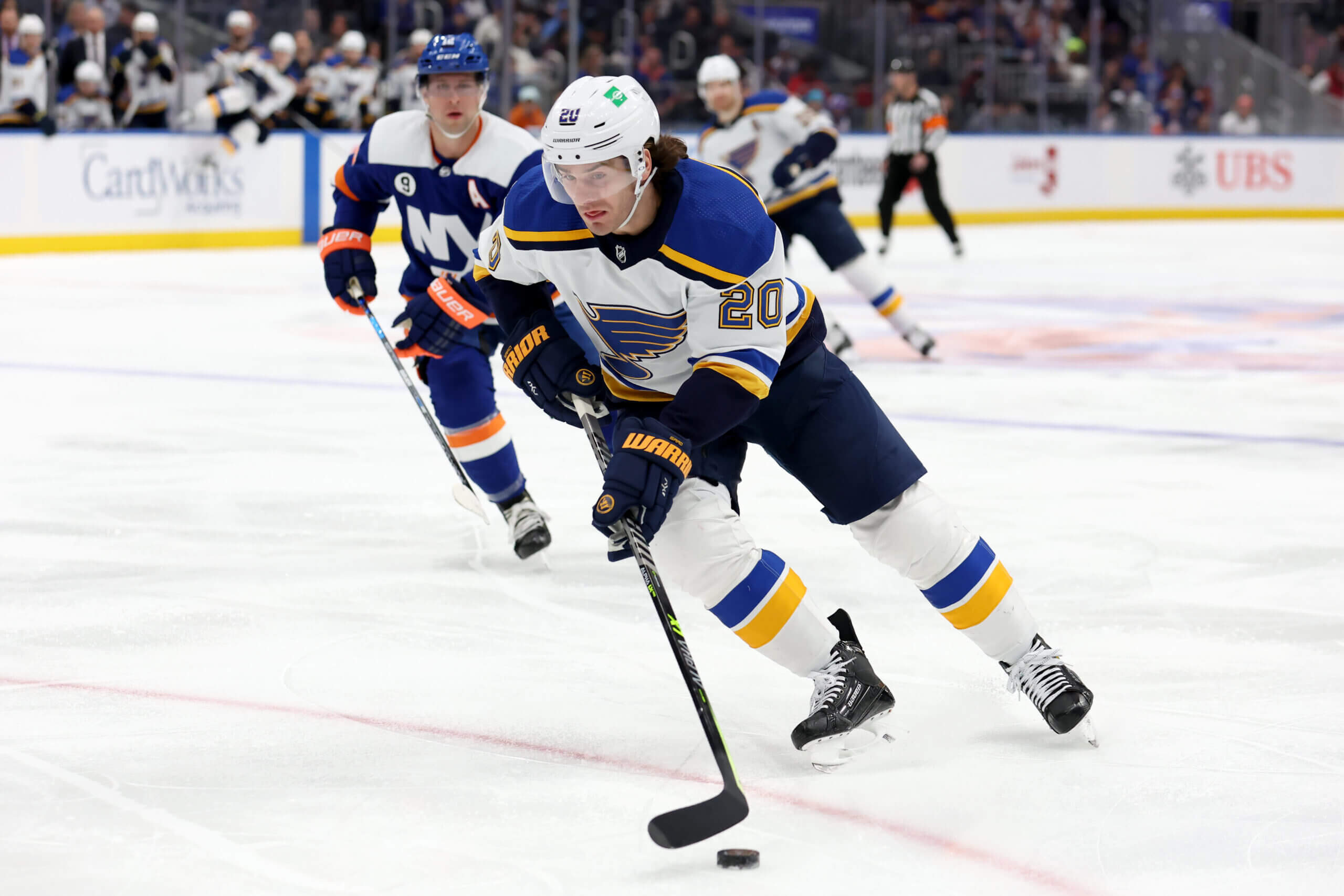 He’s exactly who the Blues thought they were getting in free agency last year, and they were fine giving him a five-year, $22.5 million contract. At 29, there may not be a lot of takers with four years left on the deal, but they’re not looking to move him anyway.

The Blues have tossed his name around in trade talks in recent years, but nothing materialized. In February, he signed a two-year, $1.9 million extension, which helps them keep one of their inspirational leaders around longer at a cap-friendly cost.

It’ll be interesting to see what kind of opportunity he gets with the Blues after being acquired from Ottawa last year and playing 39 games for his hometown team. He’s on a one-way contract worth $750,000 in 2022-23, so he should be in the mix.

After spending four seasons bouncing back and forth between the NHL and AHL, he played a single-season career-high 30 games with the Blues in 2021-22. He may still spend time in the minors, but he proved to be dependent when needed. 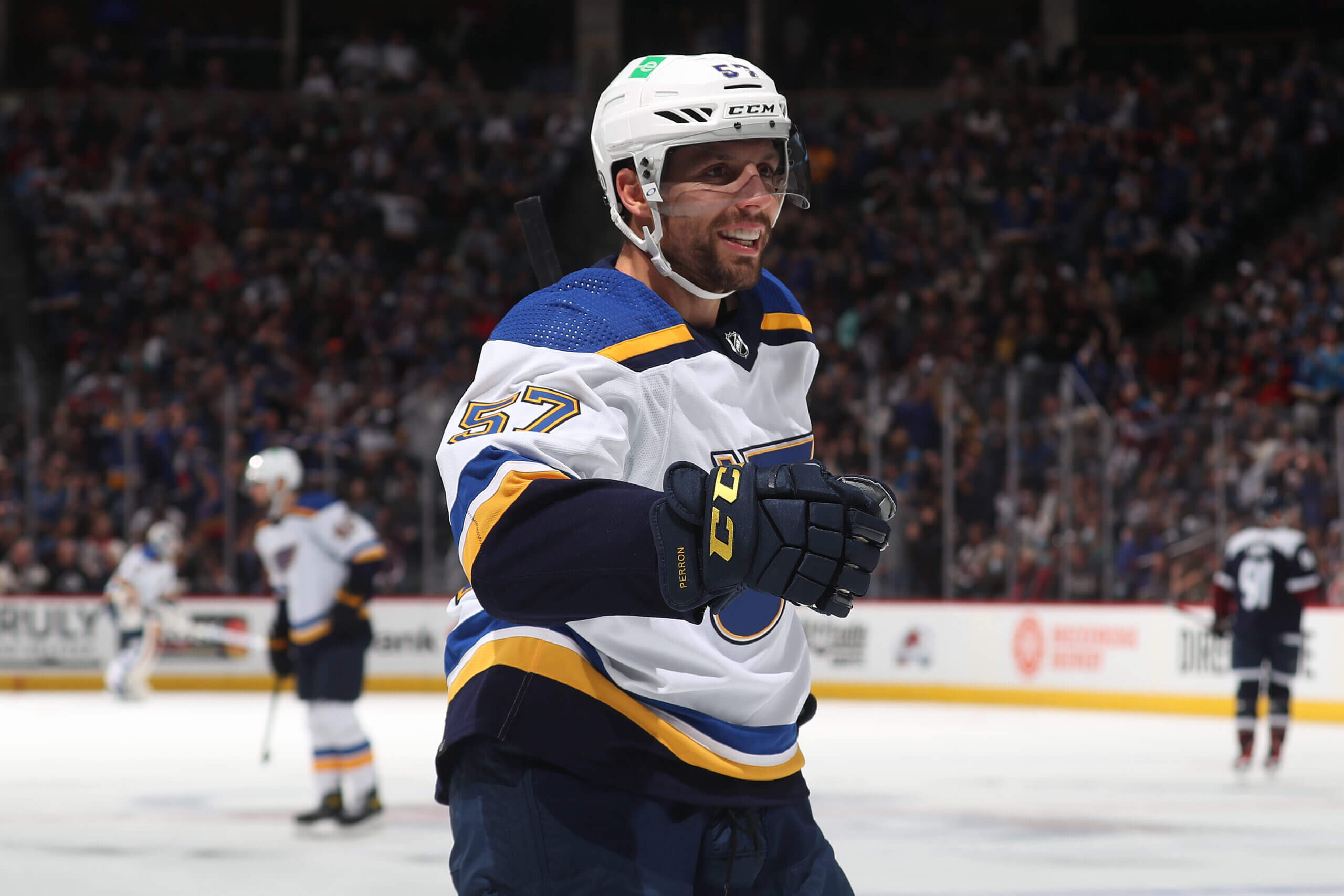 Less than a month before free agency, he still doesn’t have a deal, which is a little concerning. But the Blues’ budget is tight, so the club has to find the right price point with the fan favorite. I believe that when two sides want something to happen, it will happen.

He needs a new contract and has arbitration rights, so he’ll be getting a modest raise this summer. The 26-year-old has played a combined 84 games the past two seasons, and the Blues like what they see. It’s safe to assume he’ll be in their top seven on defense.

Even though he looked good in the playoffs, especially running the point on the power play, he doesn’t seem like the Blues could get full value for him in a trade because of his injury history. The RFA needs to come back and show that he can stay healthy. 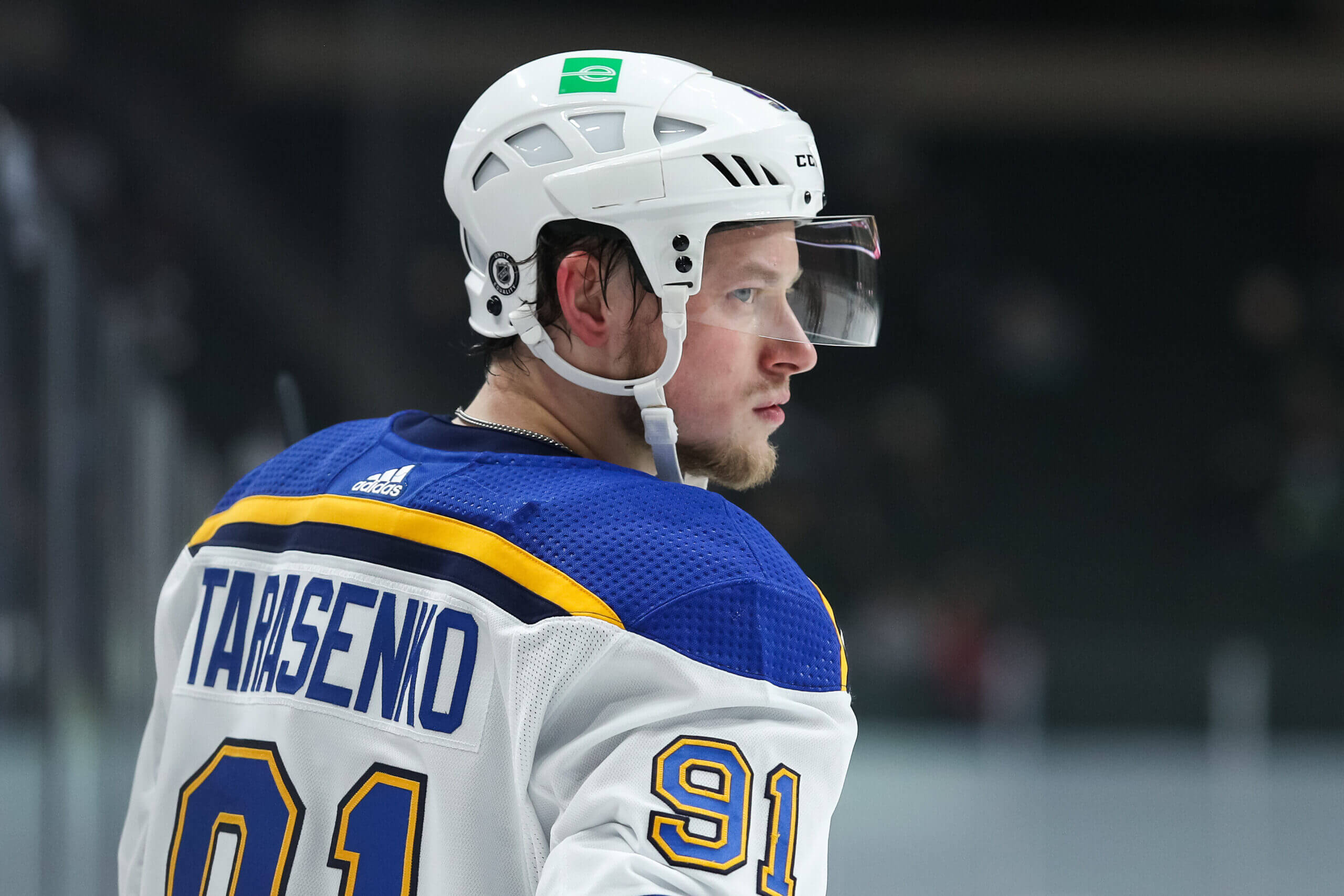 This is a tricky situation, but the bottom line is that you have to listen if the phone rings. That doesn’t mean you have to trade him, but you have to listen. His 34-goal, 82-point season had to entice someone, and since he’s not signed beyond next summer and has asked for a trade in the past, it has to be a consideration.

This isn’t to imply that the Blues are receiving offers. I put him in this category because if the team is talking trade, he’s a player who you might try to include in the deal. He has two years left on his contract, and moving his $3,275 AAV would free up valuable cap space.

Could be on the move

He’ll be a UFA in July if not re-signed by the Blues. He could help the blue line, but it may be too expensive. If the 31-year-old veteran went to the market, he might find a four- or five-year contract with a $5 million AAV, and that’s probably more than the Blues can afford.

Likewise, he’ll be a UFA if not re-signed, and going to market is looking like a strong possibility. Husso is looking for a big payday in free agency and, considering the underwhelming list of available goalies this summer, he’ll likely get it. So barring the unforeseen, he’ll be leaving.

You never say never, especially with Armstrong’s affinity for respected veterans, but it appears to be the end of the road for Bozak in St. Louis. If so, it was a terrific four seasons that included 220 regular-season games, 50 playoff games, and, of course, a Stanley Cup.