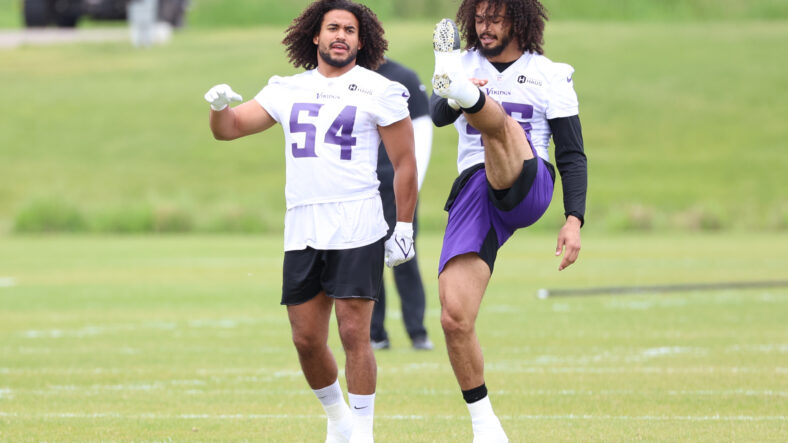 Vikings Territory‘s Purple Rumor Mill is a two-day chronicle each week. All the week’s rumors are lassoed and plopped in two spots — articles on Saturday and Sunday — for review. Today is the June 18th edition.

Remember — rumors are rumors. What you read on weekends in these pieces is what the world is talking about pertaining to the Vikings, not necessarily items that will come to fruition.

Rumor: The Vikings could or should trade Patrick Peterson and Eric Kendricks.

These ideas came from Bleacher Report. BR suggested the Vikings deal Kendricks to Denver for a 2nd-Round pick and Peterson to Arizona for a 6th-Rounder.

Neither of these trades will happen, chiefly because a 2nd-Rounder is too expensive for a 30-year-old off-ball linebacker. And on Peterson, why on earth would he electively re-sign with the Vikings — only to have that same team trade him back to his old team?

If Minnesota makes any trades this summer, they’ll be used to enhance personnel for 2022, not send off assets for future draft capital. We’re not in fire-sale territory before the season even starts.

Rumor: Gabe Brkic will have a long and fruitful career with the Green Bay Packers.

Brkic was signed by the Vikings for a month and cut last week after a lackluster minicamp. A few days later, Minnesota’s main rival, the Packers, signed Brkic.

In Green Bay, Brkic will compete with Mason Crosby, who had a stinky 2021 season. When it’s all said and done, Crosby will win his job — he’s played there forever — and Brkic will become a free agent as the Packers will release him.

Vikings fans are merely paranoid after Daniel Carlson caught on with the Las Vegas Raiders. Brkic isn’t necessarily Carlson. We understand the cynicism, though.

Rumor: Kevin O’Connell, per power rankings, is the worst head coach in the business.

NFP should’ve had a category called “New Coaches, TBD,” but they instead plopped the newcomers at the bottom of the list. And, of course, O’Connell received the unfortunate distinction of last in the business.

These don’t matter. O’Connell hasn’t coached a game yet. If the Vikings start 0-6 or something dastardly, then O’Connell will deserve heat. Until then, ranking new skippers against other coaches is meaningless and kind of a hatchet job from NFP.

Dustin Baker is a political scientist who graduated from the University of Minnesota in 2007. Subscribe to his daily YouTube Channel, VikesNow. Hey host a podcast with Bryant McKinnie, which airs every Wednesday with Raun Sawh and Sally from Minneapolis. His Viking fandom dates back to 1996. Listed guilty pleasures: Peanut Butter Ice Cream, ‘The Sopranos,’ and The Doors (the band).