The Abt Audi driver made the crucial pass on Dev Gore’s Team Rosberg Audi on lap 14, and was never threatened thereafter to win by 1.873s over the American, as Marco Wittmann (Walkenhorst BMW) passed Lucas Auer’s Winward Mercedes for third on the final lap .

After holding off fellow front-row starter Felipe Fraga’s Red Bull Ferrari at the start, Feller dipped his right-rear wheel into the gravel exiting the final corner and his loss of momentum allowed Fraga to pounce over the line.

But the Swiss was given another chance to attack Fraga when the safety car was called following a clash between Rolf Iniechen and Thomas Preining at Rivazza 1 on lap three, while race one winner Rene Rast pulled off with a right-rear puncture on his Abt Audi at the same time.

Going into the gravel to avoid a first lap skirmish between Maxi Buhk and Laurens Vanthoor meant Gore was at the back of the pack, and he along with Arjun Maini (HRT Mercedes) pitted at the first opportunity on lap five – although the Indian’s stop was fractionally before the pit window opened, and he would have to come in again.

But that meant they cycled to the front when the leaders came in on lap six, with Fraga just rejoining ahead of Feller. 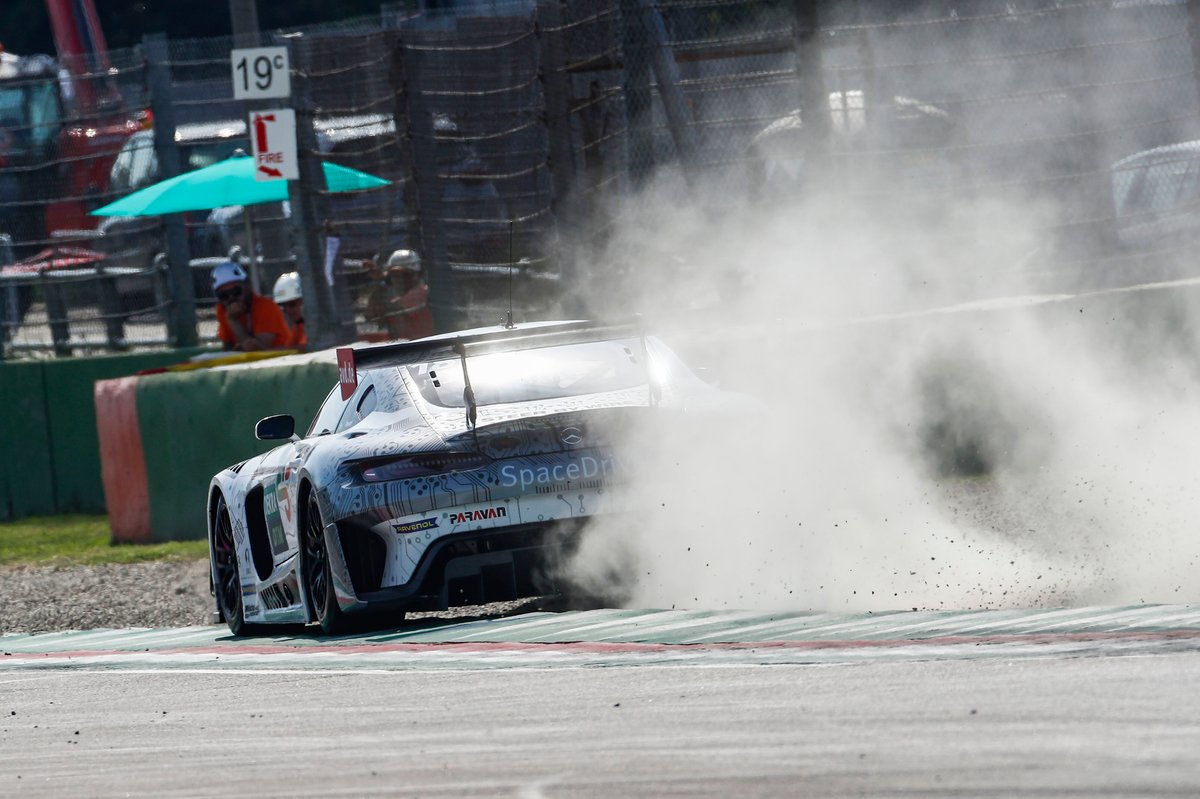 Nick Cassidy and Dennis Olsen gambled on staying out, so led at the restart, where Feller crucially got ahead of Fraga on the run to Tamburello.

A flying restart from Auer, who passed Wittmann, Luca Stolz and Maro Engel, meant he was in position to challenge Fraga around the outside of the Tamburello left-hander, but in his efforts to hold off the Mercedes, the Brazilian took too much curb on the inside and and bounced into Auer. The contact cut Fraga’s right-rear tire and led to his retirement.

That meant Feller could concentrate on attacking Gore for the net lead, and the reigning GT Masters champion got a better run exiting Tosa to make the pass stick entering Piratella.

Once Cassidy and Olsen peeled in for their stops, Feller ran untroubled to the finish and made up for the puncture that put him out of a points finish in race one.

Gore held on to score a his maiden DTM podium in second and Auer looked set for third until he was ambushed into the Villeneuve chicane on the final tour by tow-time champion Wittmann.

Auer – who had earlier survived contact in the pits with Mirko Bortolotti when the Italian left his box and nudged the Mercedes into the wall – just held off championship leader Sheldon van der Linde’s Schubert BMW to finish fourth, as Philipp Eng (Schubert) made it three BMWs in the top six with a late pass on Maro Engel’s Gruppe M Mercedes into Variante Alta.

Behind Engel, Gore’s team-mate Nico Muller held off a baying pack of cars to finish a hard-earned eighth. That included a three-wide moment with Luca Stolz and Maxi Gotz from which the Swiss remained ahead, as defending DTM champion Gotz and Bortolotti completed the scorers.

Following his stop on lap 20, Cassidy finished a lowly 17th ahead of Maini, though had the consolation of fastest lap.