Baseball people know how long a 162-game season actually is, so a mid-June series is never going to be overstated around a major-league baseball field. At this point in the year, the Blue Jays still have 98 games — 3 1/2 months — left to go. A lot can happen with that much baseball to play.

So, ahead of three games against the New York Yankees, their division rivals and current runaway leaders of the American League East, Blue Jays manager Charlie Montoyo wasn’t treating these three games as though they were any bigger than the other 159.

“We got to take care of every game we play, this is life in the American League East, many good teams and they’re all going to be fighting for a (playoff) spot and the Yankees are playing good baseball, so are we ,” Montoyo said. “So, no, we don’t take any bigger stock because of who they are. We just need to win every game just like every other team that’s fighting to get to the playoffs.”

Naturally, Montoyo, who is as focused on one day at a time as they come, is going to say that. But, who are we kidding? With the way the Yankees have been dominating this season — they’re on pace for 121 wins — this series feels like a barometer for the Blue Jays. Sure, they could only make a small dent in the 10-game lead the Yankees had built in the division race ahead of Friday, but it’s a chance to see how Toronto stacks up against the class of Major League Baseball, especially now that the Blue Jays have been swinging the bats better.

Since the last time these two teams met May 10-11, the Blue Jays have gone 20-11 (.645) before Friday and improved their offense enough that it ranked second in the AL (.755), per OPS. Despite their very good winning clip, the Blue Jays gained no ground on the Yankees. They’ve actually fallen further back — New York went 25-8 in the same span and its offense (.759) is ranked first.

And the Yankees certainly looked like the superior of the two offenses in the 12-3 rout over the Blue Jays on Friday night in front of the 44,688 at the Rogers Centre.

“This was a good test for us,” Blue Jays starter Ross Stripling said. “And we weren’t really up to the task tonight.” 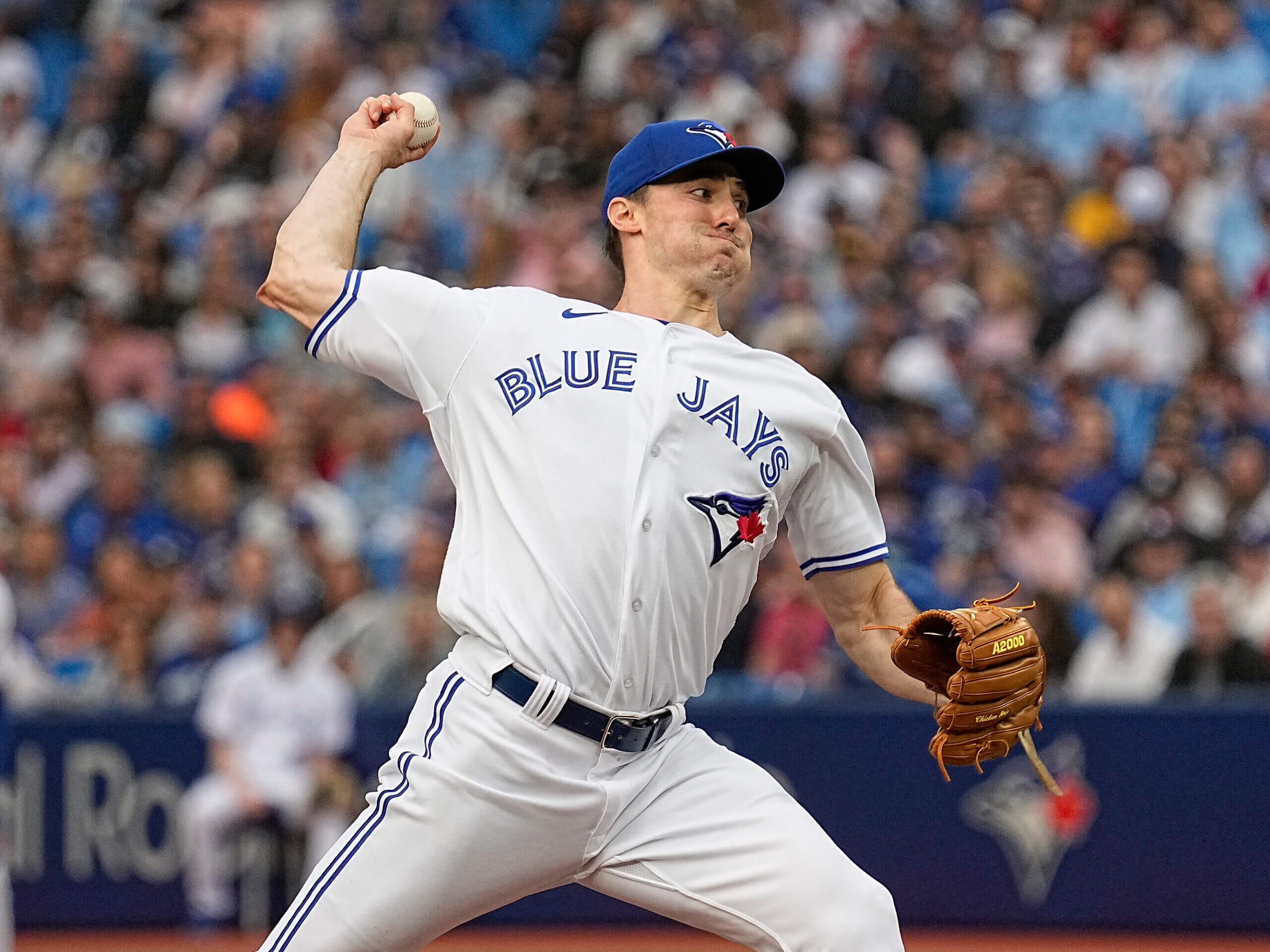 Ross Stripling lasted 3 2/3 innings and 84 pitches before he came out of the game. (John E. Sokolowski/USA Today)

It was one game, but it was hard not to feel like the lopsided score only underlined the wide gap that separates these two AL East rivals. The Blue Jays aren’t as bad a team as this type of beating makes them look — but, man, it’s hard not to think the Yankees, winners of eight straight, might indeed just be this good.

“I’m not going to sit here and toot their horn by any means, but they almost have 50 wins here in the middle of June, so they’re certainly clicking on all cylinders,” Stripling said. “I think they have one of the lowest ERAs in baseball and a lineup that can do damage from the first pitch, one through nine, basically. So that was on full display for them tonight. But we’ve played them a ton, and we know what they like to do, and we know we can compete with them. We know we’re better than what we showed tonight.”

After Friday, the Yankees lead the season series 7-3. They’ve outscored the Blue Jays 47-25 in those 10 games. The Blue Jays only have nine remaining head-to-head meetings against New York, which has built an 11-game cushion. That means if the Blue Jays want to compete with the Yankees and push them for the division title — a tall task at this point — not only do they need to start beating the Yankees themselves, but they’ll also need other teams to start beating them, too, or else they may need to set their sights on a wild-card spot instead.

Early on, this game felt as though it could be a close one. The Blue Jays scored first when rookie catcher Gabriel Moreno shot an RBI single up the middle in the second inning. The Yankees went ahead 2-1 in the fourth inning courtesy of a Gleyber Torres double and Kyle Higashioka groundout. All the while, the Yankees worked up Stripling’s limited pitch count, so though he was managing to work around traffic on the bases, he was knocked out of the game after 3 2/3 innings and 84 pitches, having given up two runs on five hits with two walks and three strikeouts.

“Just battling really,” Stripling said of how they drove his pitch count up. “I threw 20 pitches to Gleyber and I went and watched both those at-bats and I threw a lot of good pitches. He just kept fouling them off, took some good ones. I threw him a changeup that I swear was a strike for 60 feet, 5 inches, and he didn’t swing at it. These guys are hot right now.

“They battled, they spit on some really good sliders, so then I tried to start throwing some four-seams in that lane to get him to start respecting the slider and that helped a little bit, but then I threw a couple bad ones that led to some hits,” he continued. “You’re just out there playing chess with them. And throwing the kitchen sink as I say after every appearance here, but just kind of tip your cap to them for fouling off good pitches, taking good pitches, getting into counts where they put the ball in play, and eventually wearing me down and get me out of the game.”

Right-handed reliever Trent Thornton took over for Stripling and got out of the fourth inning, but the Yankees blew it wide open in the fifth, scoring eight runs off Thornton and Trevor Richards. Giancarlo Stanton, DJ LeMahieu and Anthony Rizzo homered, the latter of which was a grand slam.

Credit Toronto reliever Casey Lawrence, called up from Buffalo on Friday to give the bullpen some length, for coming in and throwing three scoreless innings in relief before allowing a two-run home run to Joey Gallo in the ninth. He at least saved Toronto’s leverage arms from work. But beyond an Alejandro Kirk home run and another RBI base hit from Moreno, the Blue Jays bats — missing Bo Bichette, who was out with a foot contusion — couldn’t keep up with the Yankees this evening.

Kirk’s hitting .353 since the start of May! pic.twitter.com/SGR7lSVcF3

“They have good starters, so they have a chance, so they’re in the game every game,” Montoyo said. “And, of course, their lineup’s swinging the beats. And they probably have the best bullpen in the league that I’ve seen so far, so they’re a complete team.”

Two games remain in the series, and the Blue Jays will need to forget this performance before Alek Manoah takes the mound against Jameson Taillon on Saturday. It’s only one game of 162, but it was one in which the Yankees thoroughly outplayed the Blue Jays.

“We’ll come out here with Manoah tomorrow, who’s just been a guy we’ve relied on through all like, what, 26 of his major-league starts here,” Stripling said. “Rely on him again tomorrow to give us a position to win but they’re hot. No doubt about it. But we’ll flush this one and be ready to get after it tomorrow.”