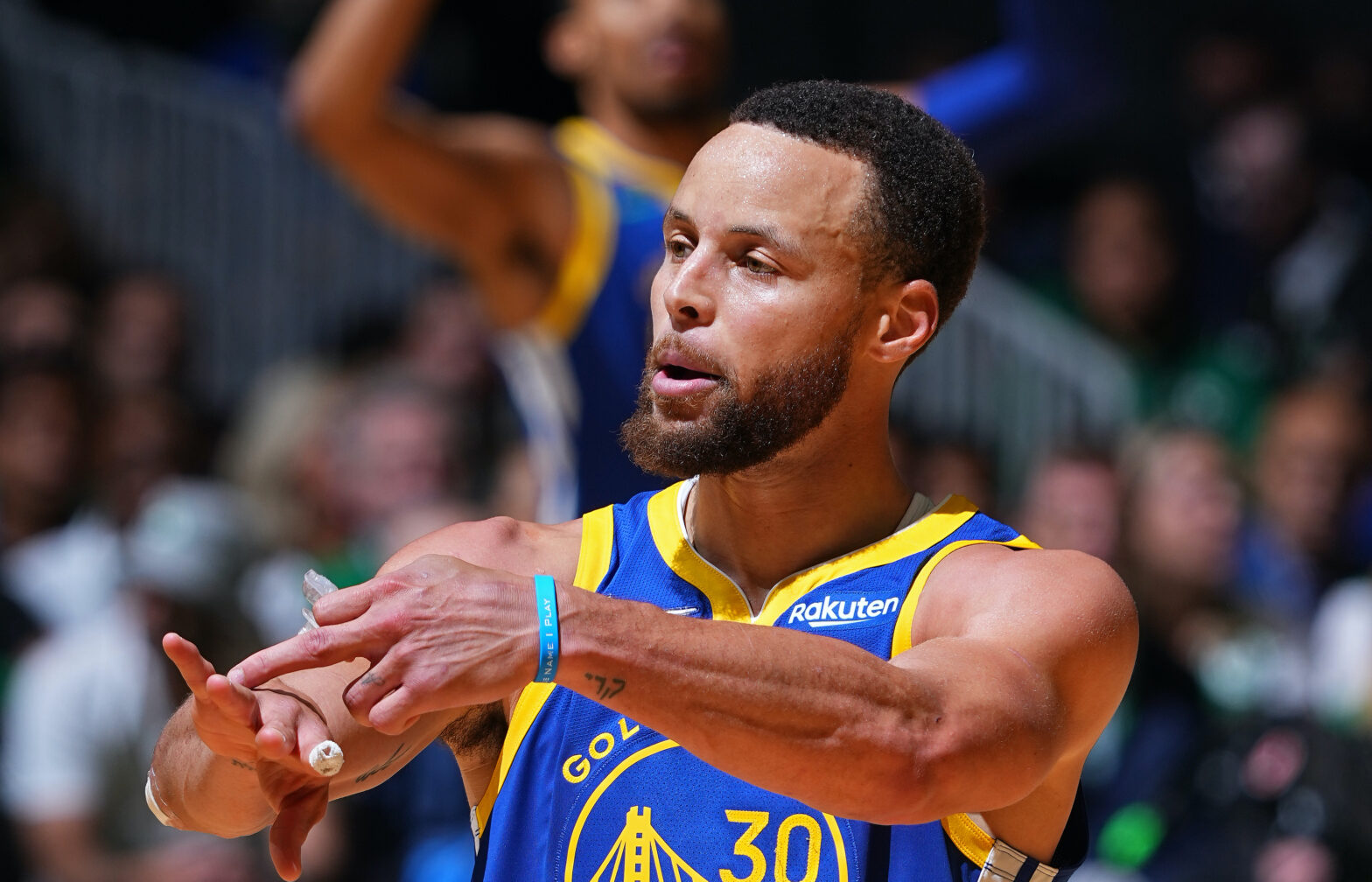 Stephen Curry points to his ring finger during Game 6 of the 2022 NBA Finals.

On Thursday night in Boston, Stephen Curry was crowned an NBA champion for the fourth time and took home his first Bill Russell NBA Finals Most Valuable Player award, adding the one missing accolade to his future Hall of Fame resume.

As the Warriors celebrate their fourth championship in eight seasons, we take a closer look at the numbers Curry posted in his greatest Finals performance yet. Here are five numbers you need to know from the Finals MVP:

In the 2019 Finals vs. Toronto, Curry averaged 30.5 points, 5.2 rebounds and 6.0 assists as the Warriors lost in six games. Three years later, Curry hit those marks again as he averaged 31.2 points, 6.0 rebounds and 5.0 assists in Golden State’s six-game series win over the Celtics.

Curry adds another layer to this amazing stat line as he is the only player in NBA history to average at least five 3-pointers per game in the Finals. He first accomplished this feat in 2018, but this year he added 5.2 3-pointers to his already astounding 30-5-5 to give him the first-ever 30-5-5-5 Finals since the introduction of the 3-point shot in 1979-80.

Stephen Curry drills the dagger 3 to finish off Boston.

Stephen Curry led all players in scoring with 187 total points over the six-game series as he accounted for 29.7% of Golden State’s 629 total points scored in the Finals. To add some context to Curry’s level of production, here are the next five players responsible for their team’s scoring output:

While Curry was on the court, he accounted for 36% of Golden State’s points, including 41.3% of their 3-pointers made. But as we’ve learned throughout this Warriors’ dynasty, Curry’s impact on Golden State’s offense goes well beyond the points he scores himself. His mother presence on the court — “gravity” — commands so much attention from the opposing defense that it makes the game easier for his teammates, providing extra space and higher-percentage scoring opportunities.

One more note on Curry’s offensive efficiency against the NBA’s top-ranked defense: Curry’s 62.6 true shooting percentage is the highest from a high-volume guard (minimum of at least 100 field goal attempts; 43 players qualify) in Finals history. If we include all positions, Curry ranks ninth out of 86 qualified players.

Curry now has recorded four of the top 10 true shooting percentages posted by a guard with at least 100 field goal attempts in the NBA Finals – but none better than 2022.

Curry entered the 2022 NBA Finals holding the record for the most 3-pointers made in Finals history, with 121 in 28 games on the championship stage. With these additional six games, he added another 31 to that total, extending his record to 152. Teammate Klay Thompson (105) and rival LeBron James (101) are the only other players in Finals history with at least 100 3-pointers made.

Curry’s 31 3-pointers marked the most in a six-game series in NBA Finals; he broke his own record (25) from Golden State’s 2015 title run, the first of this dynasty. Jayson Tatum and Klay Thompson tied for the second-most 3-pointers in the 2022 Finals with 20 apiece.

Most 3s in a 6-game series, NBA Finals

Curry fell just one 3-pointer shy of matching his own record in any Finals series; he knocked down 32 in Golden State’s 2016 seven-game loss to Cleveland.

While Curry made more total 3-pointers in 2016, and he made more 3-pointers per game in 2018 (5.5) when the Warriors swept the Cavs, Curry has never shot a higher percentage from 3-point range than he did in 2022 against Boston. Curry finished the Finals shooting 31-for-71 (43.7%) from 3-point range, and that includes his first playoff game with zero 3-pointers made — he shot 0-for-9 in Game 5 before bouncing back with a 6 -for-11 performance in the series clincher.

The greatest shooter of all time just had his greatest shooting performance in the NBA Finals, and it helped him earn his first Finals MVP award.

What separates Curry from the other great shooters in NBA history is his ability to knock down 3-point shots on the move as well as stationary off the catch. Curry’s pull-up prowess was on full display during the 2022 NBA Finals as he led all players with 36 such buckets, including 23 3-pointers.

To put those numbers in perspective, no other player in this year’s Finals made more than 13 pull-up jumpers in the series and only five hit double digits:

The disparity from the rest of the field is similar when we focus solely on pull-up 3s:

5. Dominating off screens and switches

One of the key matchups to watch entering the 2022 NBA Finals was Curry against Marcus Smart, who had just been named the league’s Kia Defensive Player of the Year. When we look at Curry’s offensive matchup data from the series, we see that Smart defended Curry for a team-high 27:50 and did a solid job at slowing Curry down. Smart held Curry to 25 points on 34.8% shooting from the field, including 25.0% from 3-point range, with as many turnovers (six) as assists.

But it was when the Warriors got Smart off Curry with ball screens, which forced numerous switches, that Curry was able to exploit matchups. Curry made 18 shots, including eight 3-pointers in just under 21 minutes of matchup time against Derrick White. And Curry made 15 shots, including nine of his 31 3-pointers, in just over seven minutes of matchup time with Al Horford.

Finally, here is the game-by-game breakdown of the number of times Curry got a switch as the ballhandler on offense and the points per possession scored on those occasions. In Game 4, Curry saw more switches than any player in a game over the course of the series. And in the clinching Game 6, the Warriors scored at their highest rate when Curry got a switch at 1.44 points per possession.