William Saliba says he will be at Arsenal next season, not out on loan. Their manager Mikel Arteta says as much too, so for the Arsenal fans who have waited since his summer 2019 signing to see the defender make his competitive debut for the club’s first team, the signs are undoubtedly promising.

But what part could the 21-year-old play in Arteta’s plans when the games begin again with that Friday night trip to Crystal Palace on August 5?

Arsenal’s centre-back group for 2022-23 is beginning to take shape.

Last season’s first-choice pair of Benjamin White and Gabriel could be joined by Saliba, with Rob Holding also available to provide cover.

The Athletic has previously reported on Arsenal’s interest in recruiting a new left-sided centre-half to replace Pablo Mari, with the 28-year-old Spaniard having been given permission to leave permanently in this window after spending the second half of last season on loan at Udinese in Italy’s Serie A.

Although not of the utmost priority, a new left-footed centre-back remains of interest.

Arsenal pursued a deal for Nico Schlotterbeck of Freiburg in January but the Germany international, 22, wanted to remain in the Bundesliga. He is now set to join Borussia Dortmund. This summer, there have been inquiries after Ajax’s 24-year-old Argentina international Lisandro Martinez.

But Arsenal also know that, with Saliba now in the squad, they should have enough depth in central defence.

Saliba is primarily regarded as a right-sided centre-back, and right-back Takehiro Tomiyasu regularly plays to the left of center for Japan. If required, Arsenal could move Tomiyasu to the center and play one of White or Cedric at right-back.

If Saliba does stay, a left centre-back could still be signed, but only if it is a particularly good market opportunity.

But how will the Frenchman fit into Arteta’s team?

At Arsenal, substantial emphasis is placed on what centre-backs can offer in possession, so our analysis will begin there.

Assuming the manager sticks with his preferred back-four shape, Saliba will find himself mainly competing with White for a starting place. 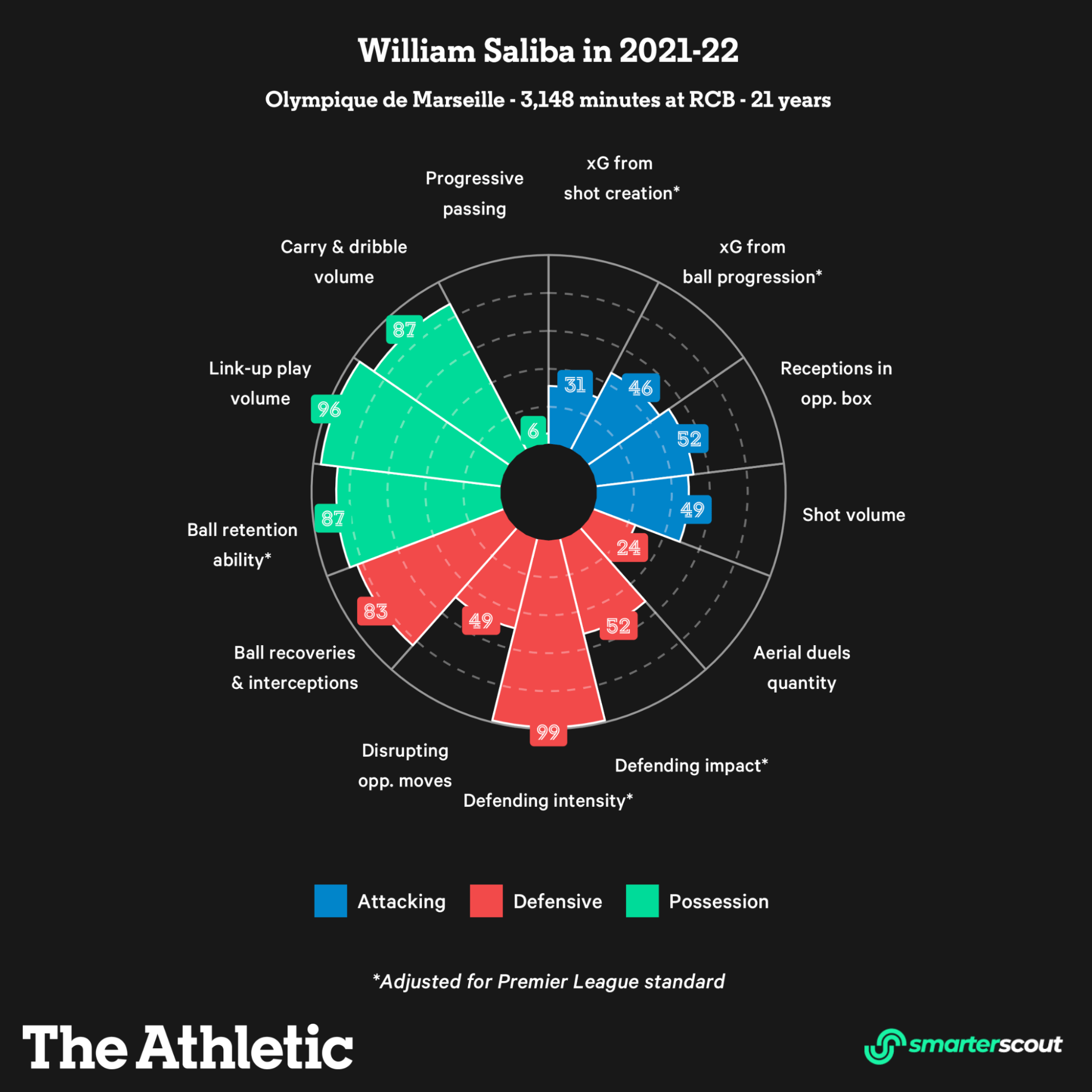 There are certain parallels between the two defenders.

Both are comfortable on the ball — in fact, Saliba made 2,384 assists while on loan to Marseille in France last season. That’s the most ever recorded by anyone in a Ligue 1 campaign.

A link-up play volume rating of 96 out of 99 shows us how he’s racked up all those passes: by playing neat, simple balls. His record of 89.4 assists per 90 minutes places him in the top three per hundred among Ligue 1 central defenders last season.

Saliba is also happy taking the ball upfield himself. He made 558 progressive carries last season — averaging 6.8 per 90, which was the highest of any centre-back in Ligue 1. 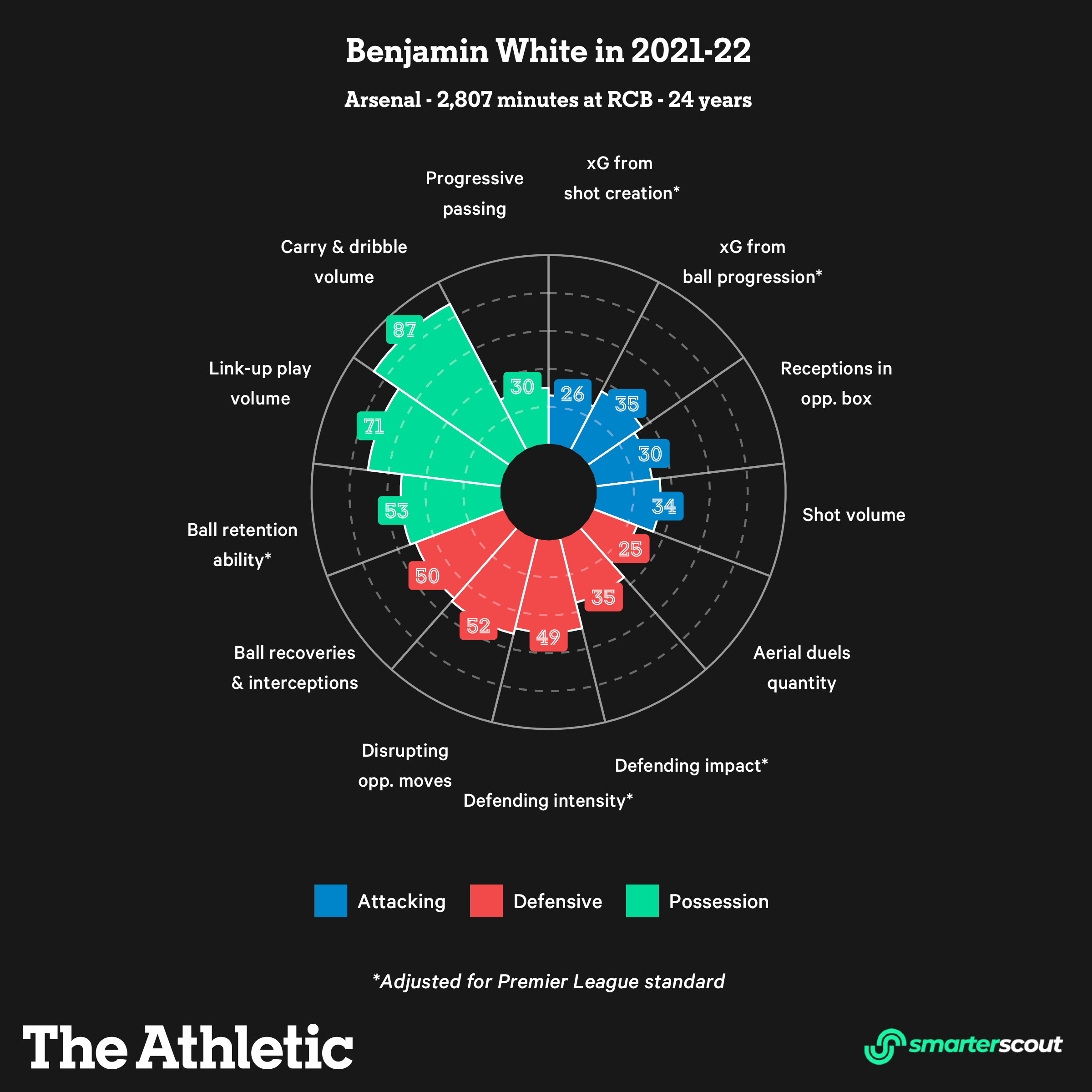 It’s striking how closely these aspects of Saliba’s chart compare with White’s.

That loan to Marseille seems to have been ideal for preparing him for life at Arsenal.

At the Stade Velodrome, Saliba frequently played on the right of a back three, just like White did at Brighton before last summer’s transfer to Arsenal. Their smarterscout ratings for carrying and dribbling are identical at 87/99 — so both players are at ease bringing the ball out of defence.

It’s worth noting that, by and large, Saliba’s dribbles aren’t marauding runs into opposition territory. They are often just little shimmies that take him away from a pressing forward, creating space to play a pass.

In this example, from the second leg of a Europa Conference League quarter-final win over Greece’s PAOK Thessaloniki in April, Saliba delays and actively invites pressure from the nearest attacker. 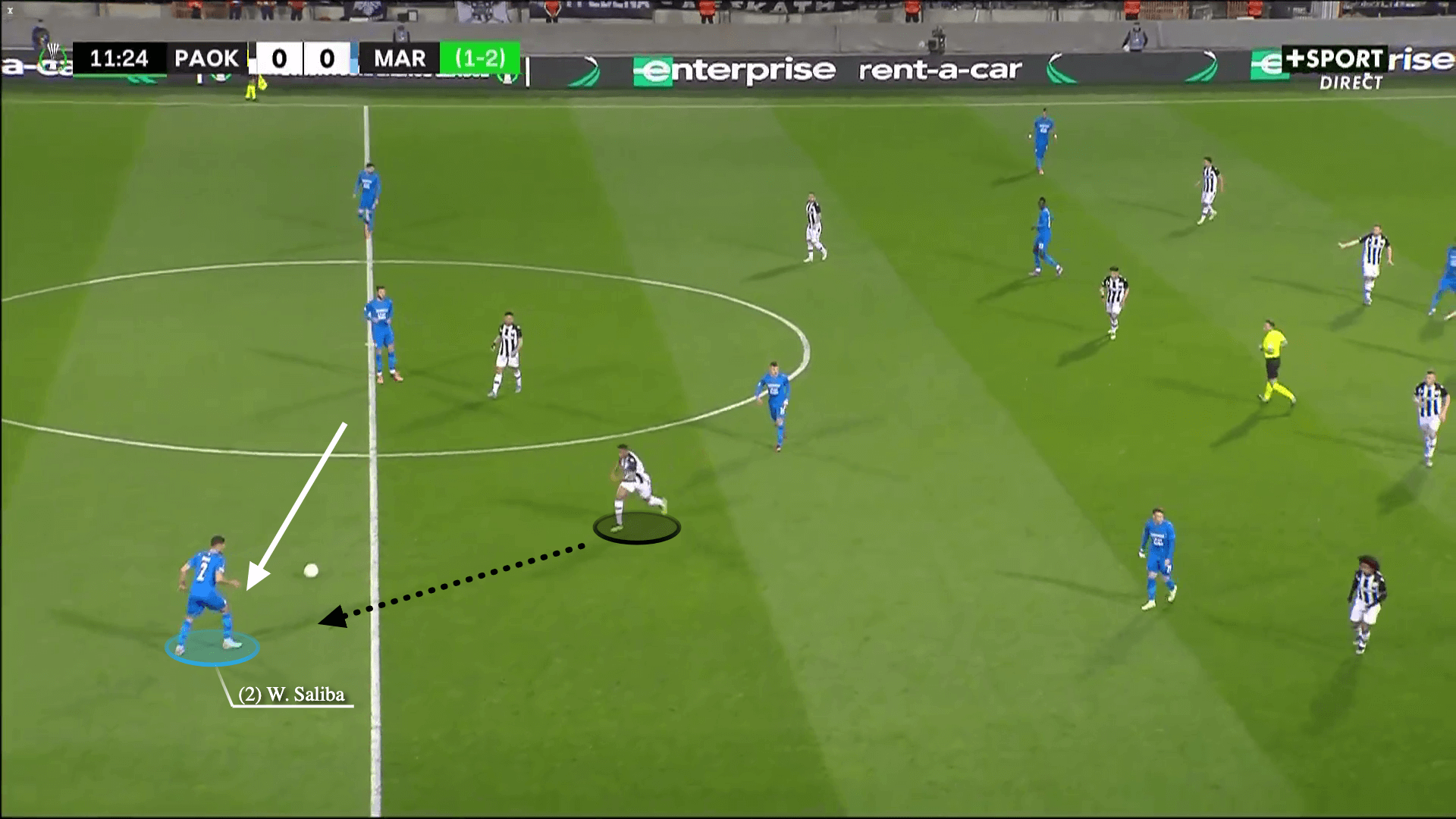 Then, at the last moment, he turns inside. This takes the forward out of the game entirely. 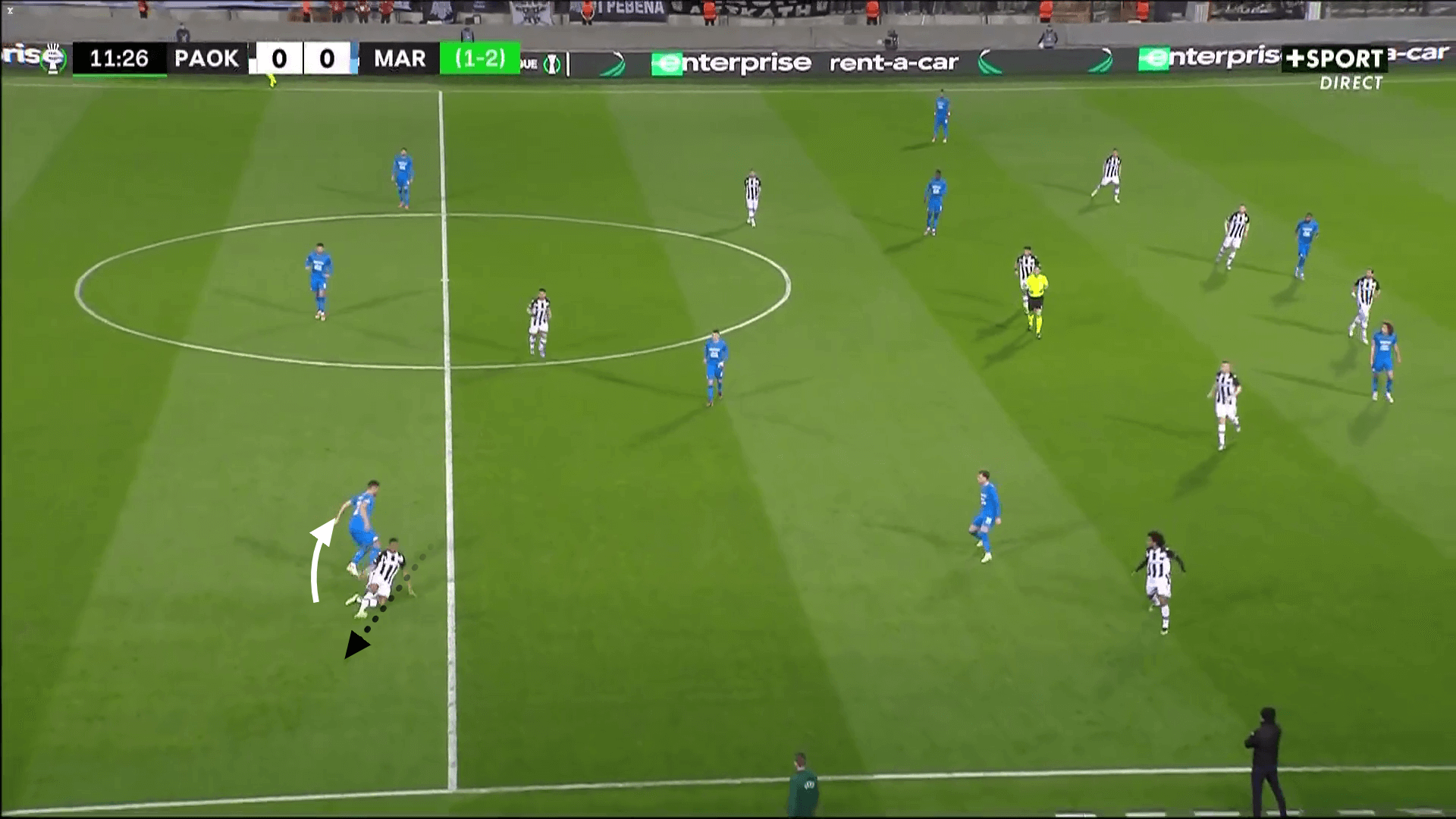 From there, Saliba has space to drive into the opposition half, with passing options ahead of him.

This was a simple move he produced time and time again last season on the right-hand side of Marseille’s build-up. 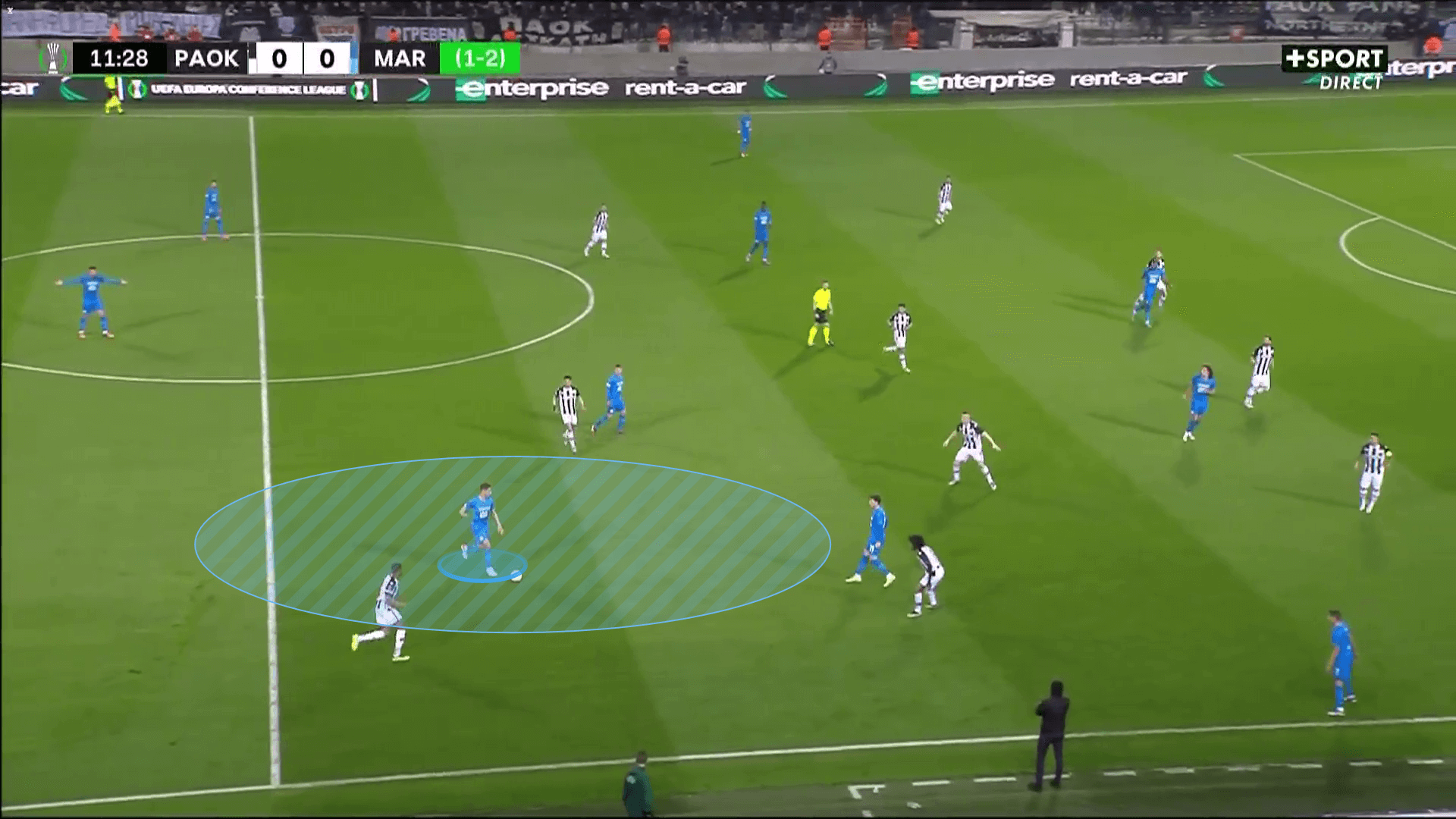 Where he and White differ is interesting, too.

White does not rate as highly for link-up play or ball retention, but does perform better for progressive passing — ie passes that move his team 10 yards-plus upfield.

It may just be a function of Marseille’s style, but Saliba has been more comfortable playing straightforward short passes than the line-breaking through balls for which White has become known.

This may be something he can develop, as he does appear to have more penetrative passing in his locker.

In this example against Nantes, also in April, Saliba spots the run of striker Cedric Bakambu early. 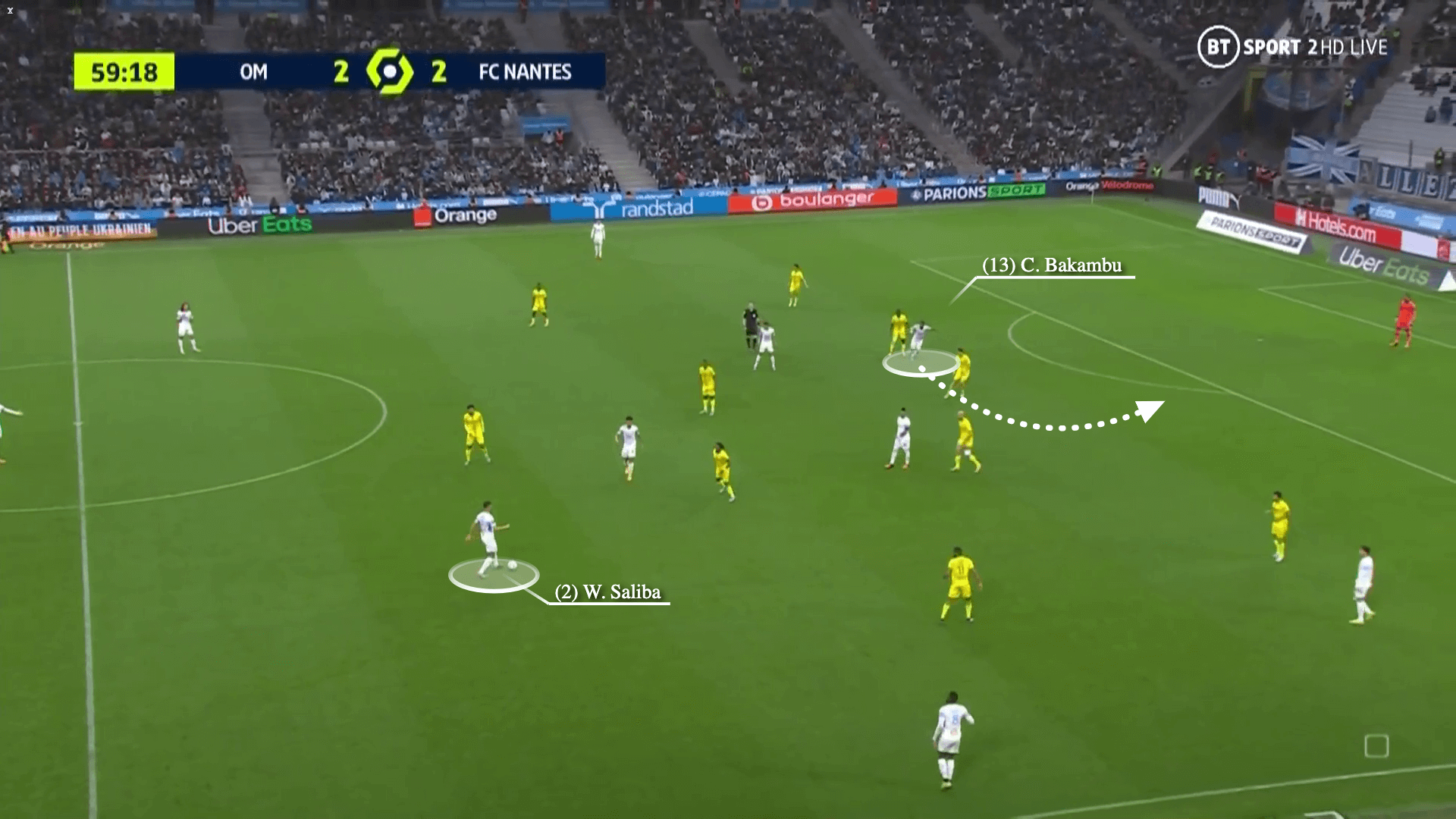 He is then able to fizz a perfect pass that bisects the defense and falls right into Bakambu’s path.

So the vision and technique are both there — Saliba just may need to produce these passes more regularly when playing within Arteta’s system. 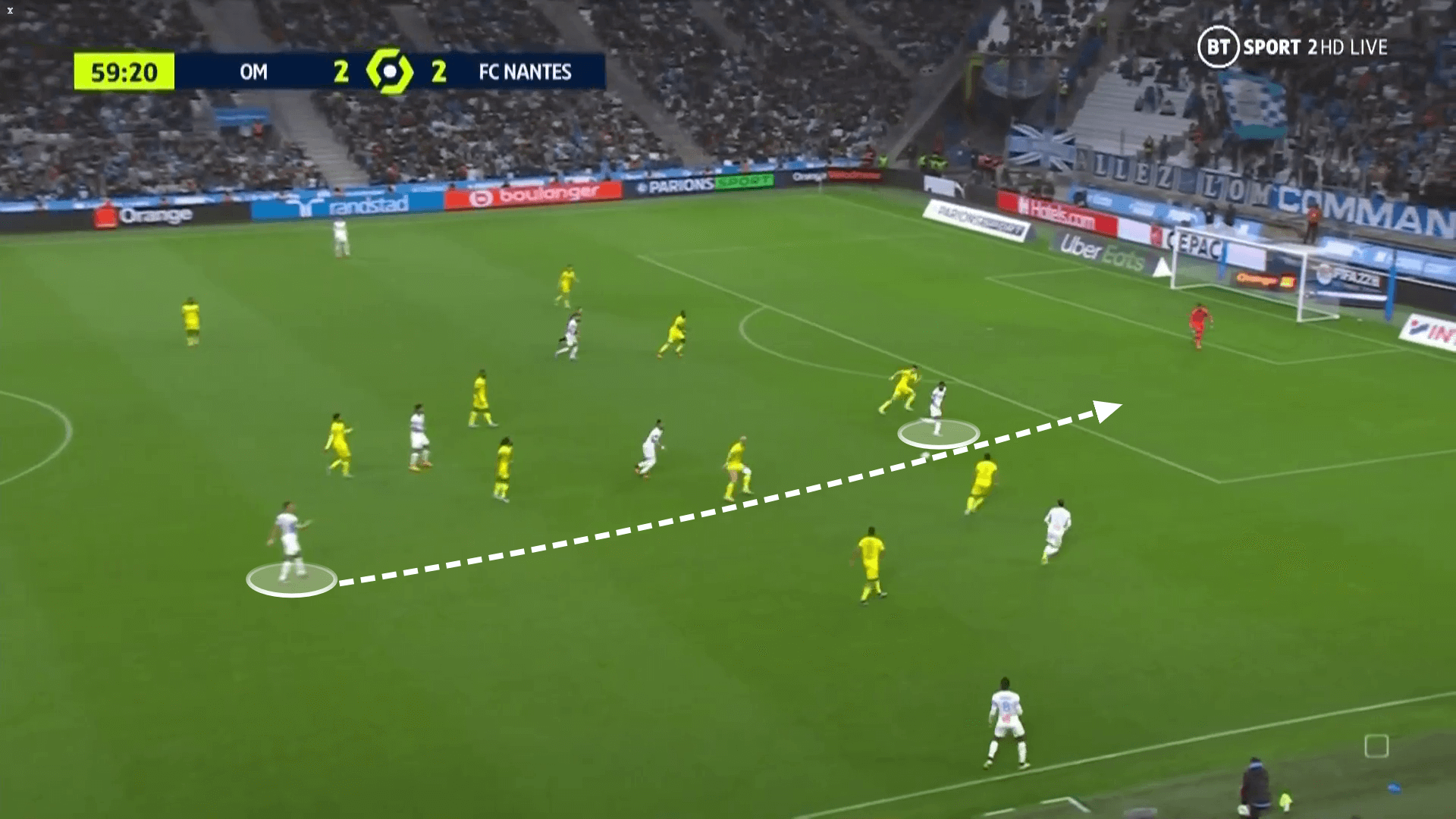 When compared with White and Saliba, Gabriel looks like a solid all-rounder on the ball. 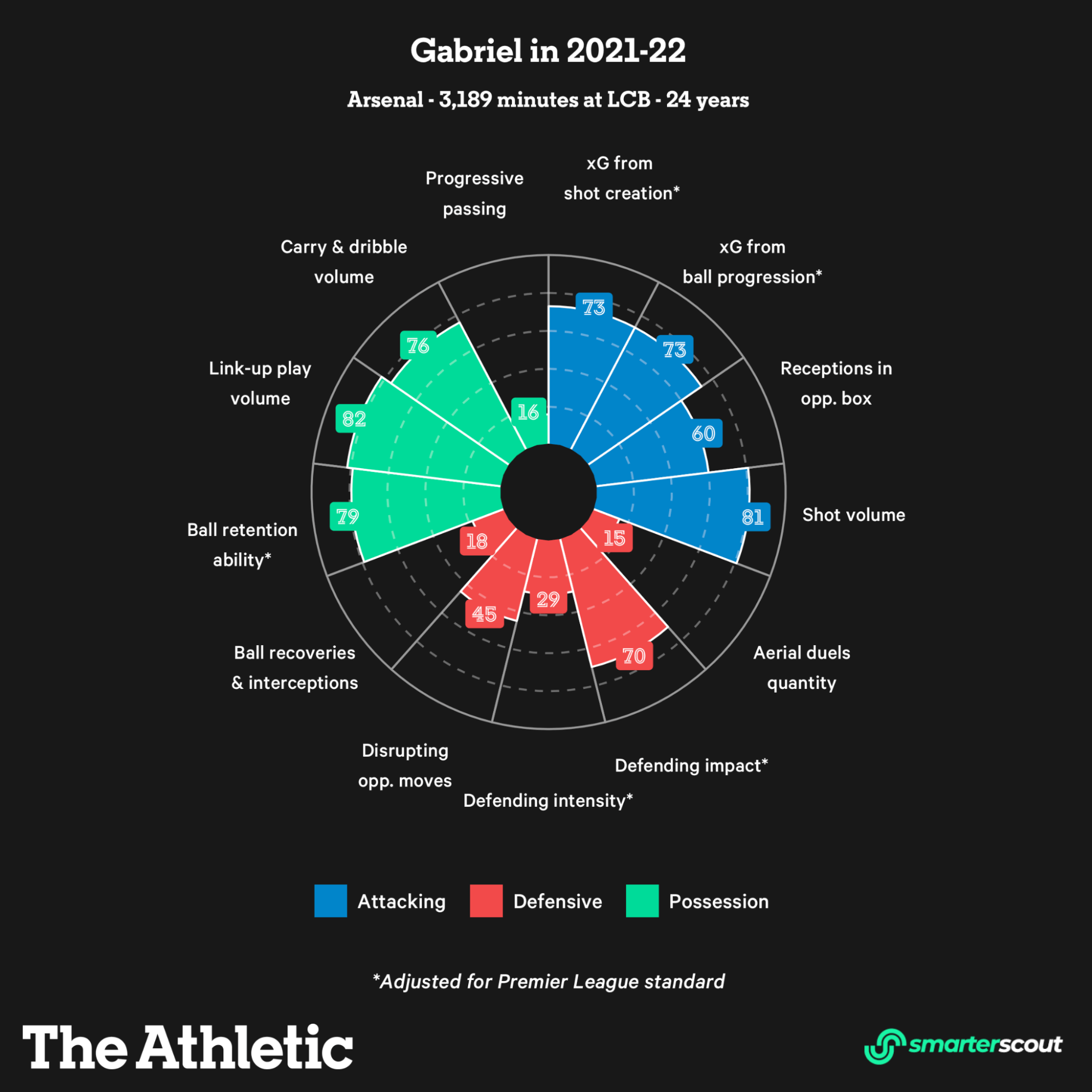 He has the ability to carry or build the play through passing, but he is not as progressive as White.

Looking at the blue portion of his chart, it’s clear Gabriel offers the greatest threat of the three inside the opponents’ penalty box. That’s borne out by the fact the 24-year-old scored five goals in his 35 league appearances last season, making him the division’s top-scoring centre-back.

Saliba doesn’t offer the same threat as Gabriel, but his physical presence means he compares favorably with White and Holding in terms of shot volume and receptions in the opposition box. He can be dangerous, even if his finishing presumably requires work — he ended last season without a goal to his name.

Of the quartet, Holding shows the least adventure in possession.

He is more conservative in his passing — and barely carries the ball upfield at all.

It’s worth considering his pizza chart covers relatively few minutes, so these numbers may not be reflective of how he would contribute over a full season. 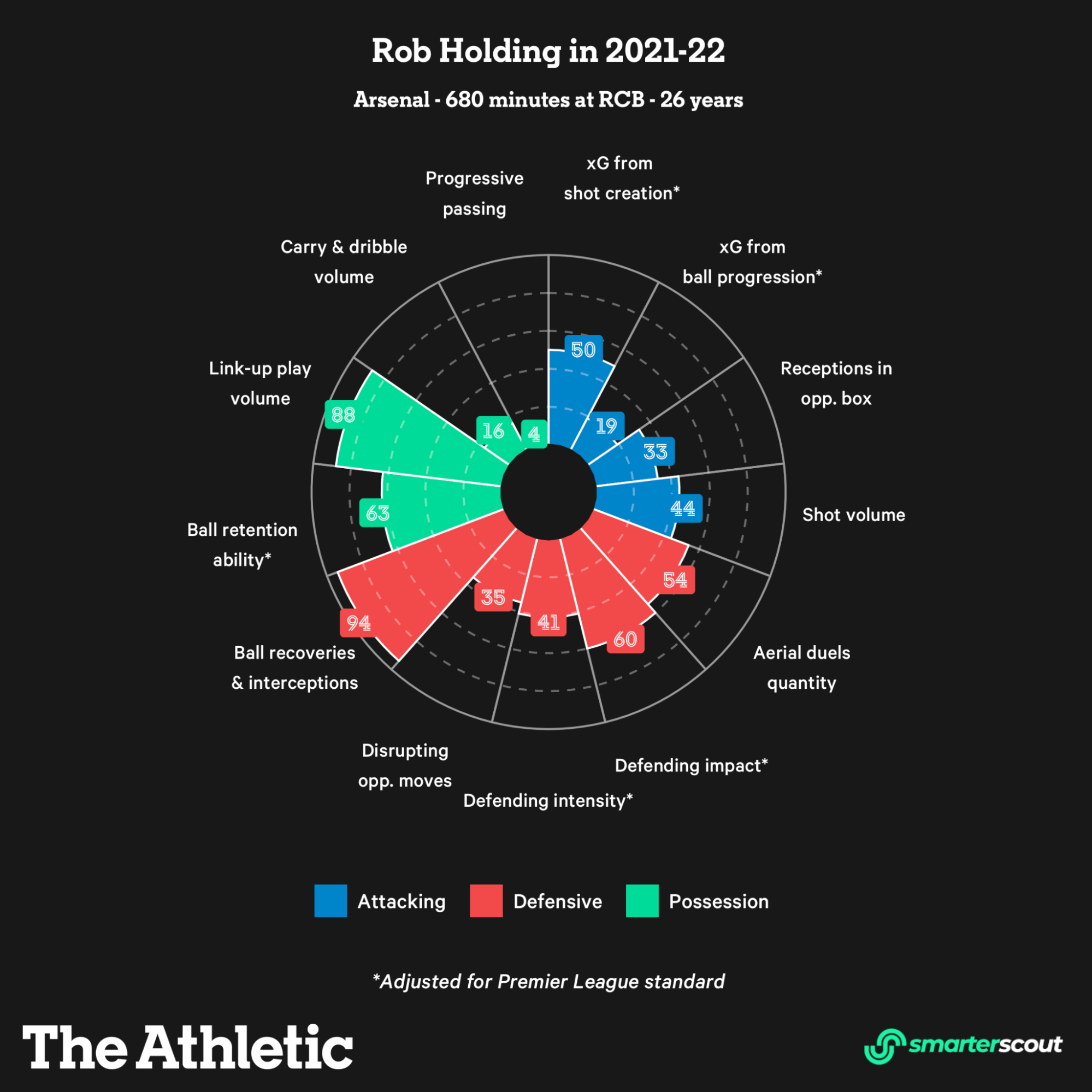 It’s worth noting that Holding is very strong on ball recoveries and interceptions (94/99), which tallies with his reputation as a good penalty-box defender.

While Saliba’s ability on the ball could be crucial for Arteta, his defensive instincts will be just as important to his chances of getting regular game-time.

The Frenchman appears to be proactive in getting tight to his man, as shown by his perfect defending intensity rating. He frequently forces a turnover when doing so: his successful pressure percentage (ie how frequently his team win possession within five seconds) last season was 47 per cent — among the top five per cent for centre-backs in Ligue 1.

This trait may be informed by Marseille’s intense, man-to-man marking style under coach Jorge Sampaoli.

Like Holding, Saliba is also good at mopping up and collecting loose balls (ball recoveries and interceptions rating: 83/99).

Where he is ahead of Holding is in his ability to recover quickly when the other team beat the offside trap and get in behind.

Arguably Saliba’s finest moment this season came late in a goalless draw at home to title-bound Paris Saint-Germain in October, when a Lionel Messi through ball from deep gave Kylian Mbappe a clear run at goal. 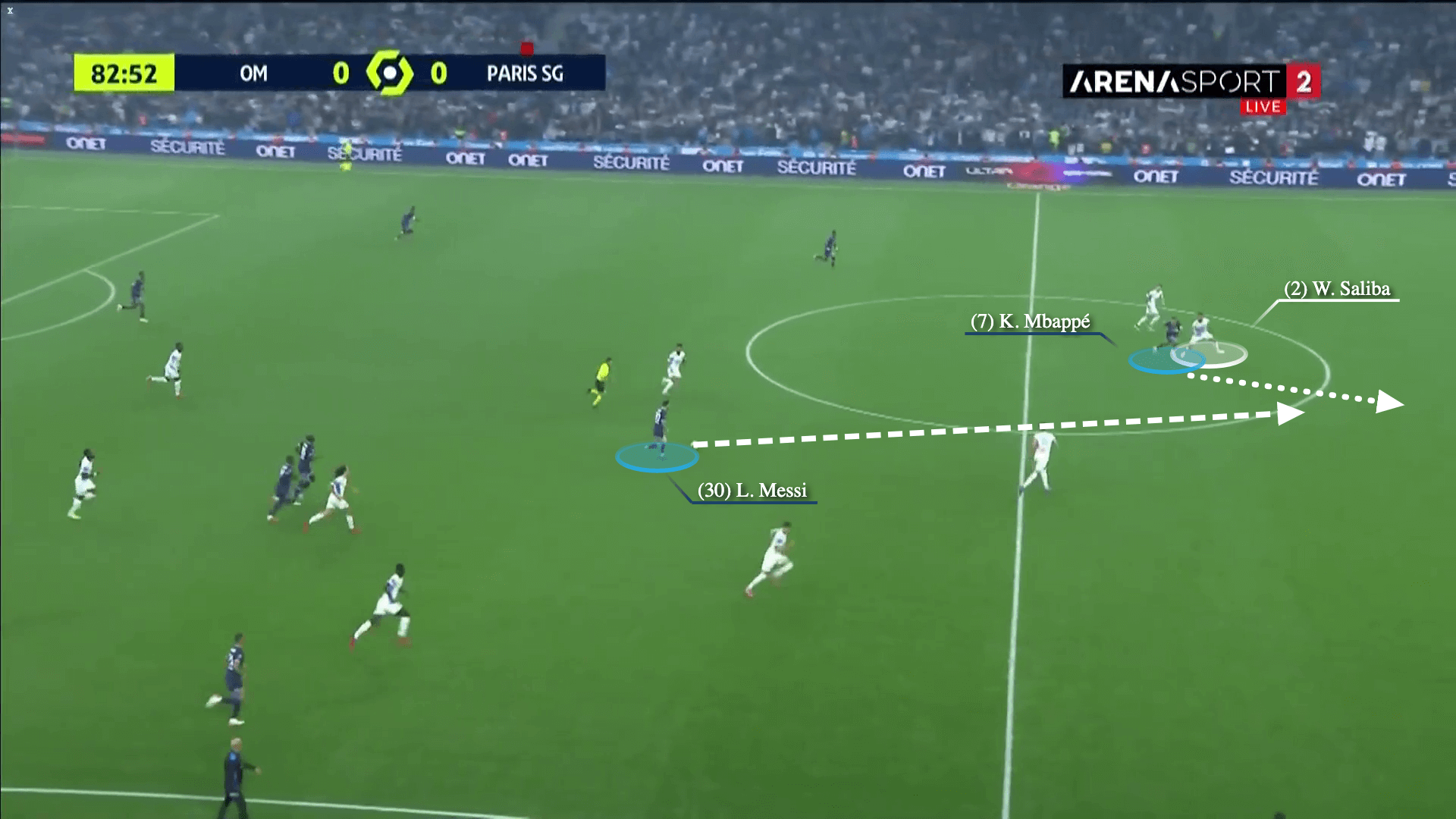 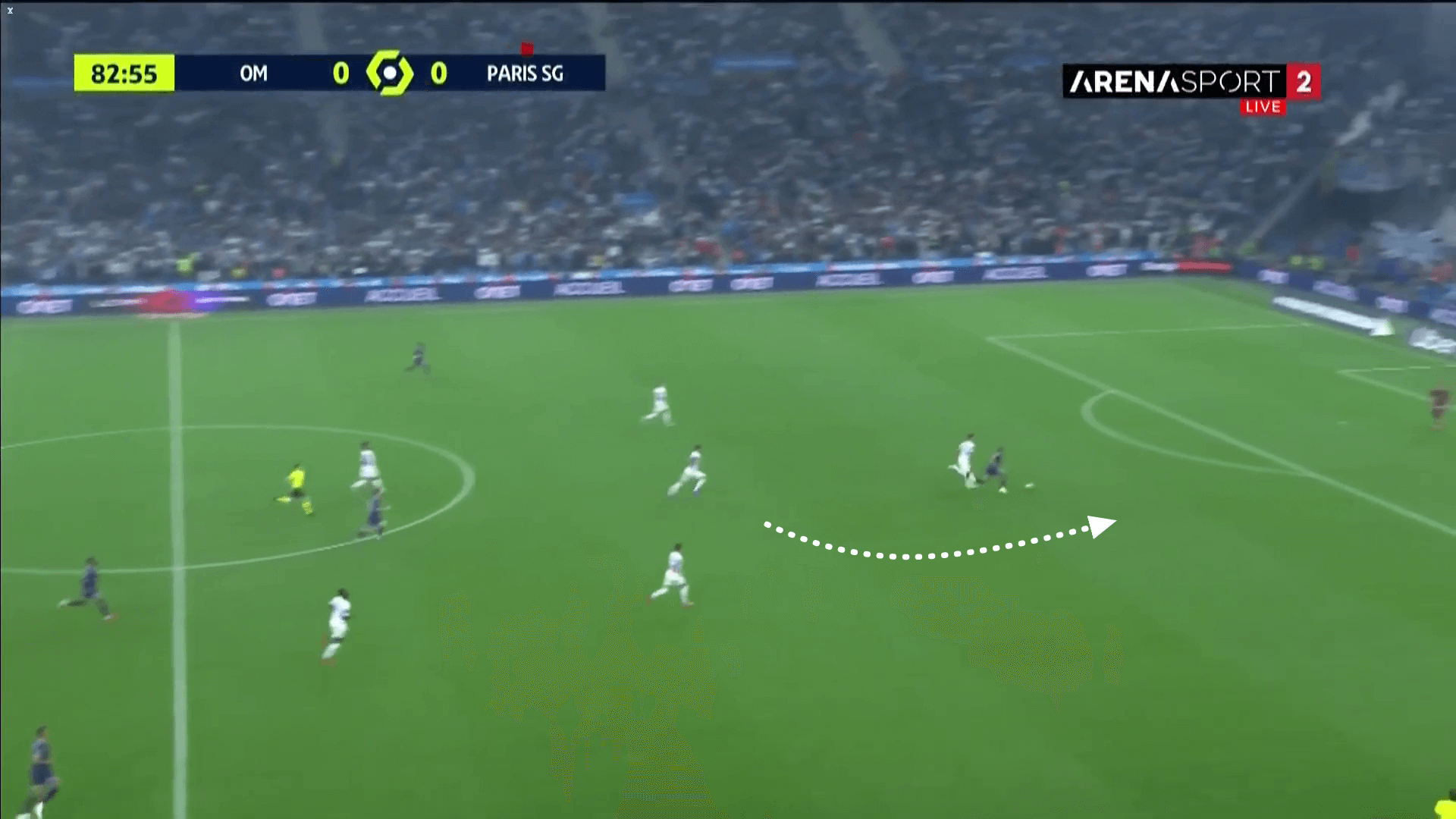 …but he is able to get back and launch a perfectly timed sliding tackle that diverts the ball away from goal. 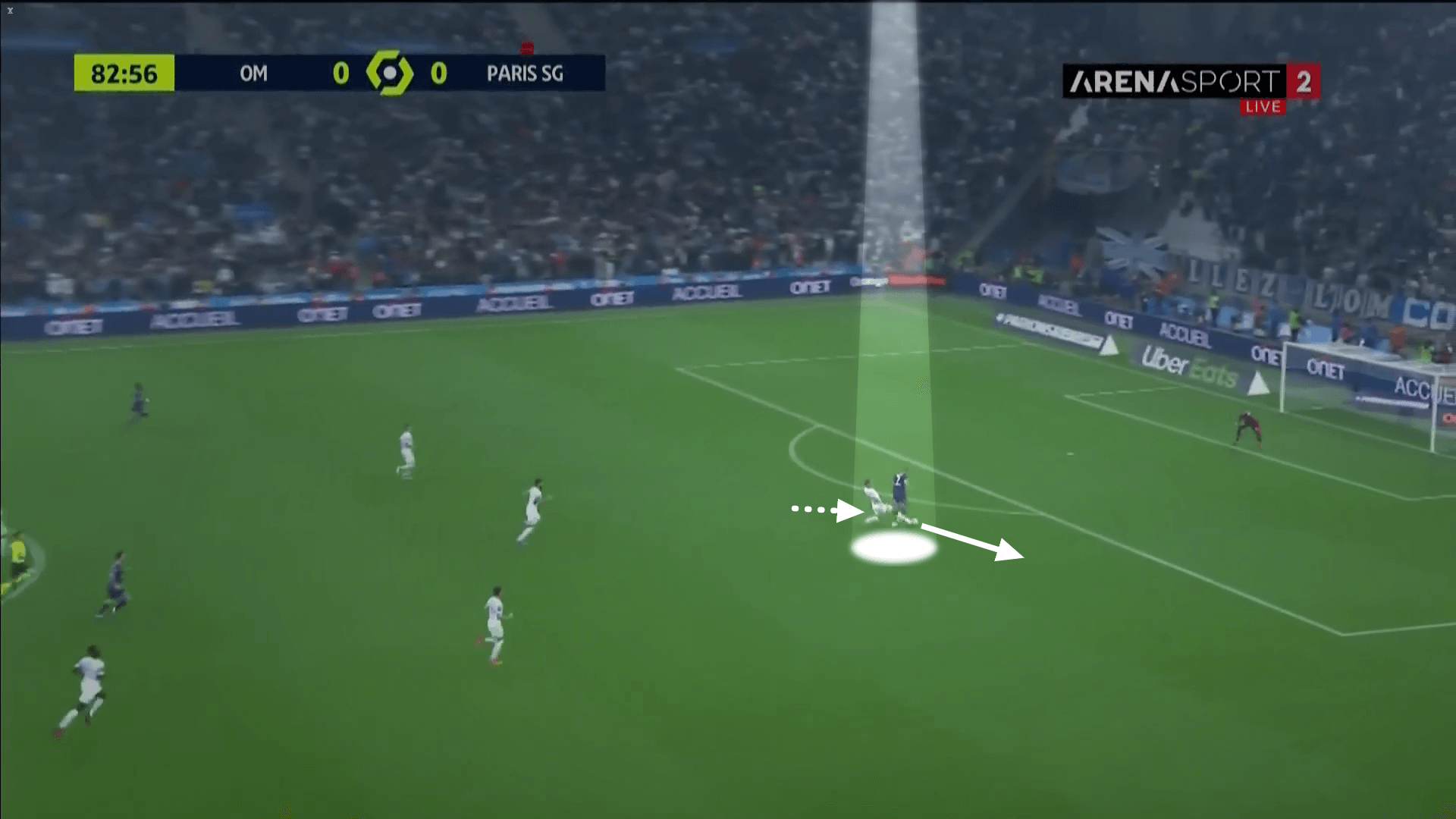 This wasn’t an isolated incident either. Saliba’s athleticism saw him produce that kind of goal-saving tackle on several occasions.

In the below example away to Lens in January, the striker has a head-start of several yards on the highlighted Saliba. But by the time he got to the penalty area, the Arsenal loanee had a) caught him and b) tackled him. 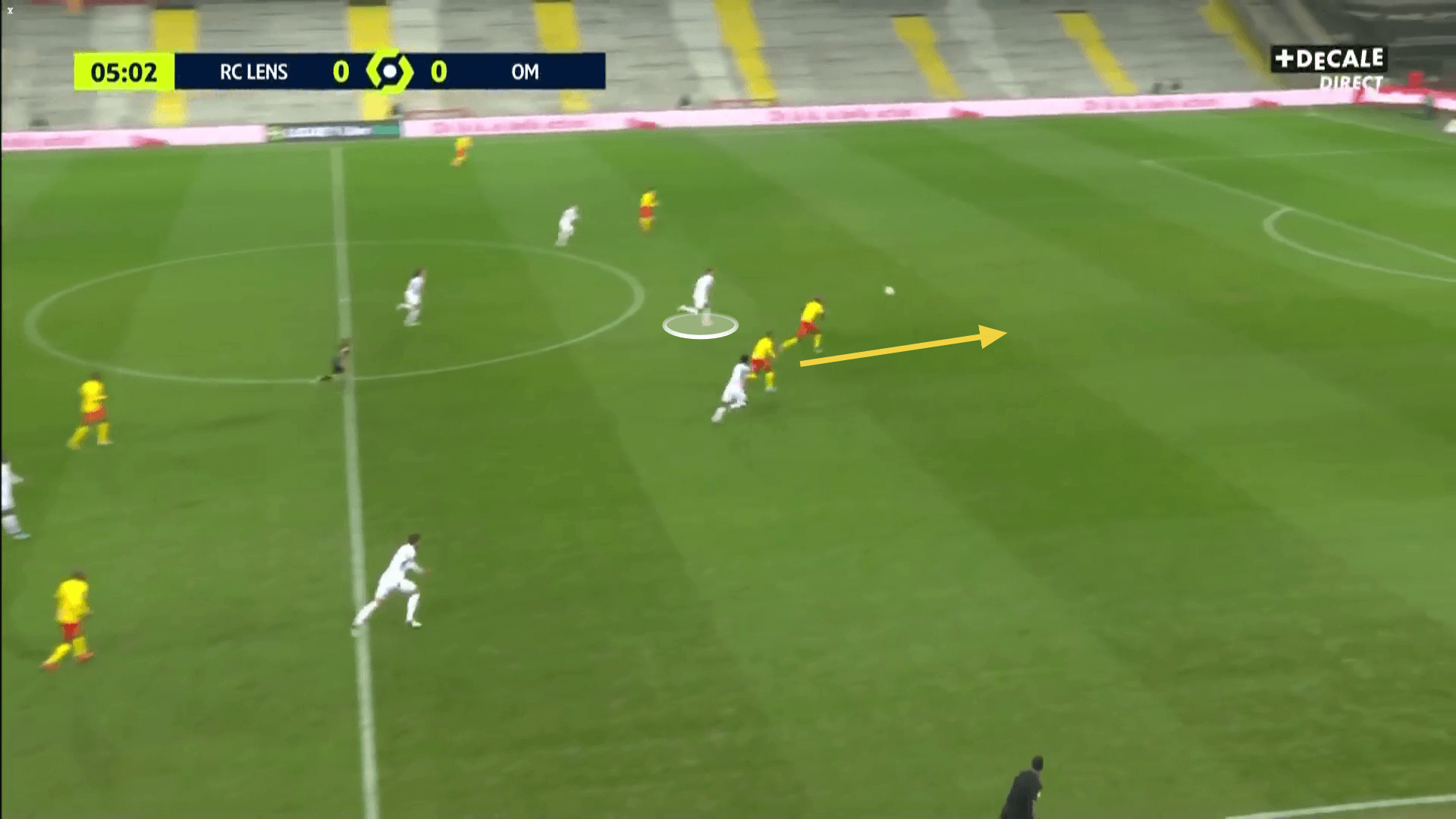 We can also use smarterscout to look comparatively at Saliba’s ability in duels.

These ratings are adjusted for the strength of the opponent he faced in each one-v-one situation. Immediately, his dribbling ability in comparison to the other Arsenal centre-backs is evident — Saliba has no issue beating a man on the ball when required. 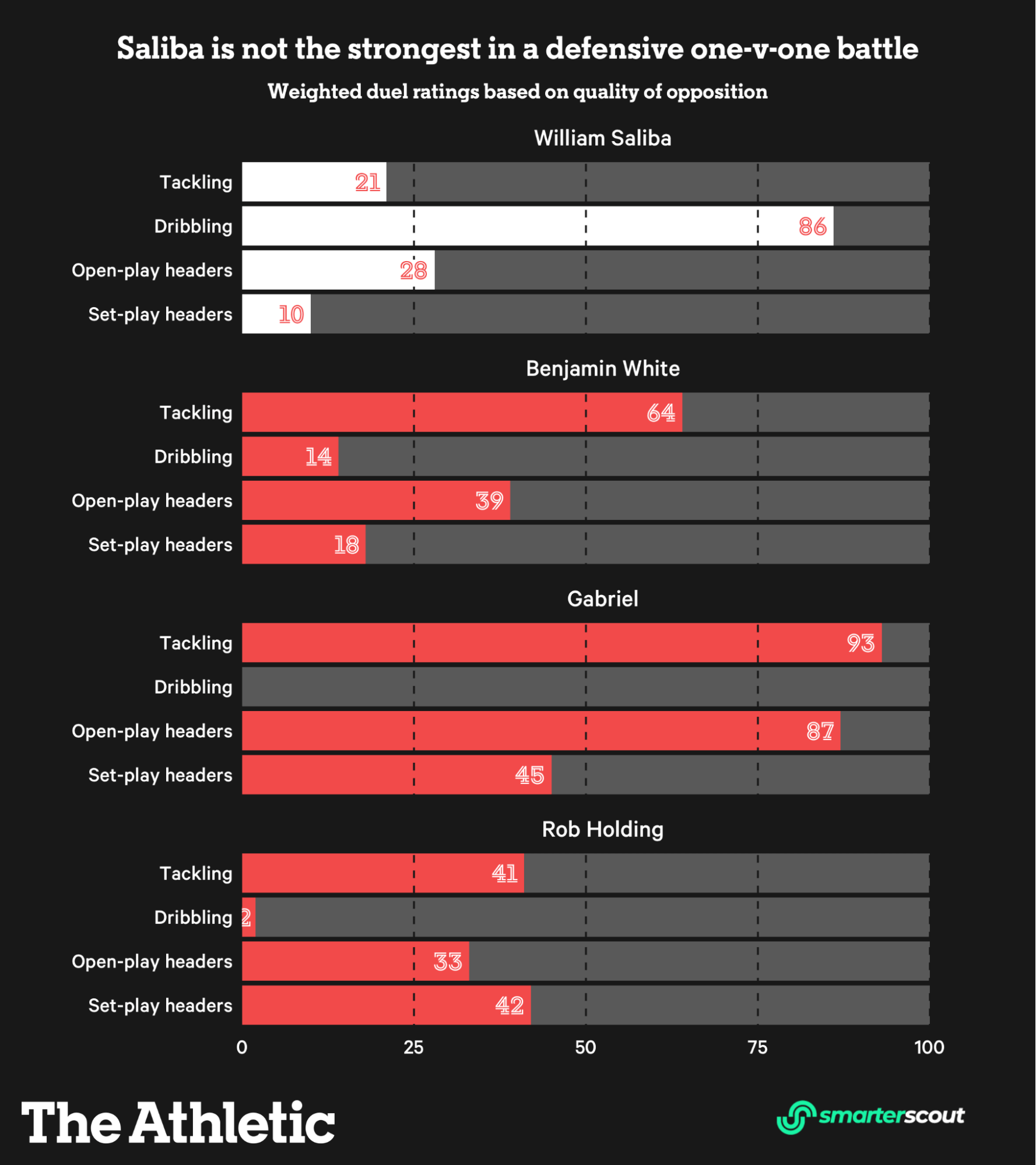 On the defensive side, however, there is room for improvement.

It’s noteworthy that it rates particularly poorly for headers. His ratings for aerial ability in duels are some way below White’s, despite this being a supposed weakness in the England international’s game, and are likely to be influenced by the lower quality of the opponents faced in Ligue 1. Despite Saliba’s imposing 6ft 4in frame, he clearly has some way to improve if he is to withstand the bombardment he may face at some Premier League grounds.

What becomes clear in this analysis is that Saliba, who played in three of France’s four Nations League games this month with two starts, does have the requisite quality to provide Arteta with an intriguing option next season.

He is plainly quite a good allegory for White — an effective ball-carrier and reliable passer — and it will be interesting to see how game-time is divided between them next season.

White played a lot of matches in his debut Arsenal season and became integral to their build-up play. With a Europa League schedule to contend with as well as the domestic program next season, he will need time for rest and recovery. Saliba appears to have the ability to step into that breach without Arsenal suffering a huge drop-off in quality.

Like any young defender, Saliba has plenty to learn, and that’s evident in some of his one-to-one duels.

As he settles in English football and matures, he may well prove to be more than a rotation option.

As Ligue 1’s 2021-22 Young Player of the Year and now a full international for world champions France just two months after turning 21, his potential is in little doubt.

Arsenal fans will be hoping the recent positive noises mean that talent could be fulfilled in a red and white shirt in north London.