Walker Racing – Team Australia as it was rebranded with Aussie Vineyards backing – had only ditched its Reynard 02Is at the end of 2004, one of the last two Champ Car teams to do so, and so 2005 was very much a learning year for Derrick Walker’s team with the aging Lola B2K. It wasn’t until 2006 that it got a real handle on the chassis’ finer points, by which time the majority of its rivals had been running with that equipment for several years. Allowing teams as great as Newman Haas Racing, Forsythe Championship Racing and relative newcomers RuSPORT a headstart made life tough.

Still, rookie Will Power came on increasingly strong in the second half of the year to score his first ever pole position in a US open-wheel car, around Surfers Paradise. Sadly, come the race, he was sent down an escape road by champion Sebastien Bourdais.

For 2007, there was a do-over with the Lolas put out to pasture, replaced by the handsome Panoz DP01. The 2.65-liter turbo Cosworth XF engines were as before, pumping out around 720 horsepower but the chassis was brand new, as was the semi-automatic gearbox. 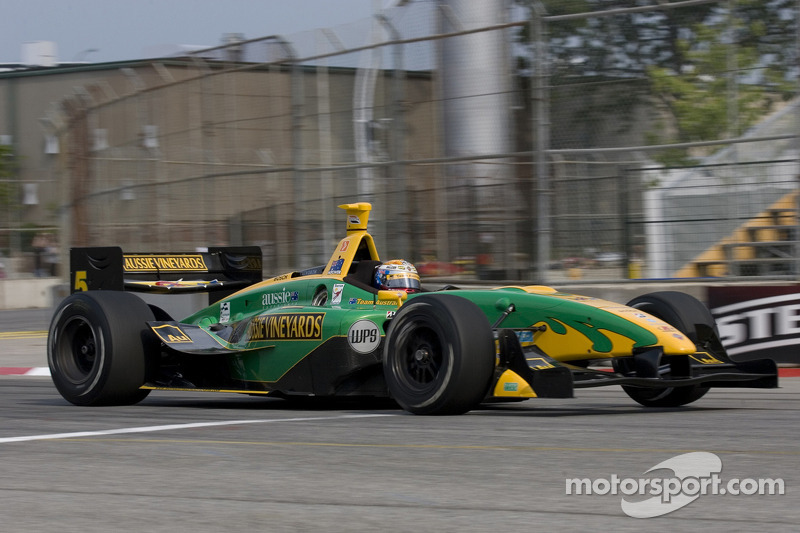 Apart from its clunky rollhoop-mounted onboard camera, the DP01 had the right blend of elegance and aggression.

The series chose Derrick Walker’s team to help test it, and these early tech insights helped make up for the shortfall in manpower and funding compared with Champ Car’s big-budget outfits. Thus Power went into the ’07 season, his sophomore year, feeling on equal footing with the other mega-talents of the series, Sebastien Bourdais (Newman/Haas/Lanigan), Paul Tracy (Forsythe), and Justin Wilson (RuSPORT).

And he loved the car.

“It definitely had more downforce than the Lola, it had paddle-shift instead of manual, and it was very well built,” he said. “It had a light gearbox even though it was seven-speed, so the weight distribution felt right: it didn’t have much weight hanging beyond the axles, so it was a very, very nimble. I can only imagine what we’d have now if we’d spent 10 years developing that because and getting more and more powerful. It would have been a beast.

“Even as it was, I thought it was a great street course car. You could run three inches of rake in the rear, more like Formula 1, because the floor made really good downforce, whereas on this car [current IndyCar] the rear has to be really low. Rake helps rotation, plus we didn’t have a stupid heavy gearbox, so the center of gravity didn’t mean as much. The downforce you gained from rake overcame what a high CoG was costing you.”

Previously Champ Car had been nominally ‘spec’, but the best teams had all been chasing the ‘unfair advantage’ from the moment they got their Lola B2Ks, finding little tweaks to the aero package, and to the shocks and dampers. From 2007, Champ Car did what all governing bodies do in such circumstances, and closed up the technical loopholes in order to try and ensure everyone’s Panoz DP01 was roughly equal to another.

“Yeah, you couldn’t do much on the Panoz – even the dampers were spec,” says Power, “and I think the diff was spec, too. You couldn’t do anything aerodynamically either.”

Power would win the season-opener at Las Vegas and would win again in summer, in the rain at Toronto, but with five pole positions to his name and a couple of DNFs outside of his control, he was left wondering what might have been, after finishing fourth in the championship. His fourth pole of the year, at Surfers Paradise, can be found on YouTube, and it’s genuinely frightening, even when one considers that the human eye is smarter than the onboard camera. How does he judge the proximity of the walls when he’s fluttering from sunlight to shadow?

“Actually, I had more time to come!” laughs Power almost 15 years on. “I was on a better lap and Derrick got nervous and said to stop because I’d got pole. But my tires were more up to temp. I could have improved.” 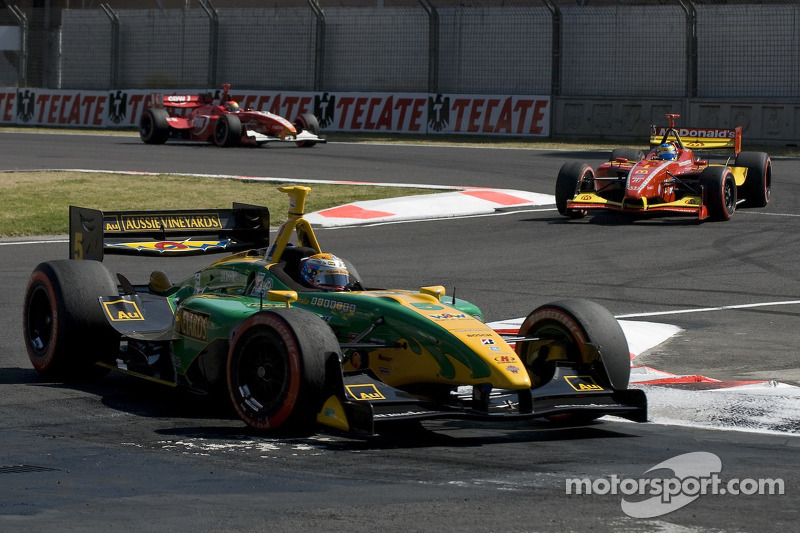 But it was his pole at the finale in Mexico City that Power considers one of the greatest lapse of his life. He qualified 0.6sec faster than second fastest driver, ex-F1 racer Robert Doornbos, and 1.1sec faster than that year’s champion, Bourdais.

“Yeah, that was a pretty solid lap,” he says in a masterpiece of understatement. “Obviously I’ve had a few poles since [he’s currently at 64, just three shy of Indy car racing’s all-time record set by Mario Andretti], but that was a pretty tight lap we put together, yeah. It was nice the way we bookended the season because in the first round in Vegas, we were 0.9sec than second fastest [Doornbos again].

“But that Mexico one felt more special because by then everyone had had almost a full year with the same car as us and we still beat them by quite a lot.

“I remember, during my year of World Series by Renault in 2005, I tested for Derrick at Portland in the Reynard [Walker Racing had kept a Reynard as its spare car], and when that turbo kicked in I thought, ‘F**k, I could definitely get used to this! It was awesome.’”

In fact, that day he set a time in the unfashionable Reynard that would have put him sixth on the grid for the Portland race earlier that year.

“Well, Champ Car was just a great formula, technically – fairly basic spec chassis, and a powerful turbo engine,” he says. “It was a real drivers’ formula, so I liked the Lola we had in 2006, my first full year [of Champ Car]. But the Panoz in ’07 took it to the next level. Awesome car.”

During the ’07/’08 offseason, the Champ Car World Series and the Indy Racing League merged, and while most schedule conflicts were resolved, there were some commitments and agreements that could not be ignored. Consequently, those teams who had already been in the IRL pre-2008 raced down in Motegi, Japan, on the third weekend in April, while Champ Car held its final race at Long Beach. In the latter, Power won the race for Team Australia, whose Aussie Vineyards livery now adorned a KV Racing entry, rather than that of Walker Racing, for whom this was the final race at this level. Power thus scored the first and last victories for the DP01.

“Yeah, that felt good,” he says. “Felt like we feel that car out in style. Pretty proud of that one. Shame that car was done after only a year.” 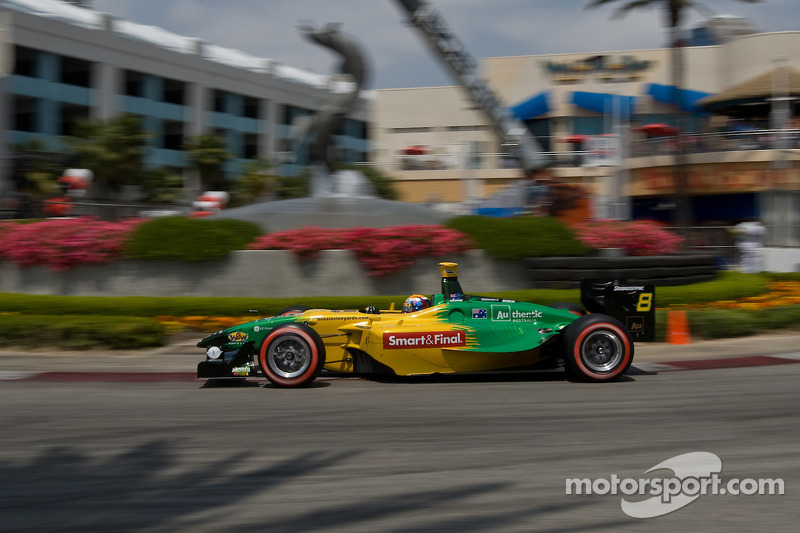